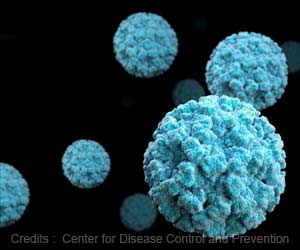 Noroviruses can still spread infection by escaping the immune system and hiding out in an ultra-rare type of cell in the lining of the gut, reveals a new study.

Noroviruses are the leading cause of non-bacterial gastroenteritis in the world and are estimated to cause 267 million infections and 20,000 deaths each year. This virus causes severe diarrhea, nausea, and stomach pain.

Advertisement
‘Norovirus hides in ultra-rare cells of the gut lining, which act as mega factories for norovirus production and allows the virus to evade the immune system.’

Although often referred to as the "cruise ship" virus in the United States, noroviruses are an expensive and serious public health problem particularly among young children, the elderly, and immune-compromised patients.


Now, in a new study published in Immunity this week, researchers from the Perelman School of Medicine at the University of Pennsylvania have used a mouse model to show that, even in immunized animals noroviruses can escape the immune system.
Advertisement
"Current vaccines against norovirus have been ineffective despite eliciting strong antibody responses," said senior author E. John Wherry, PhD, a professor of Microbiology and director of the Penn Institute for Immunology. "Understanding the unique norovirus characteristic of hiding from the host immune system may explain its biology and present opportunities to improve vaccines and therapeutics."

While most infected people clear the virus within a few days, some individuals continue to shed virus for weeks to months after. Such persistently infected people may be a source of outbreaks, but it was unclear why the immune system fails to eliminate the virus in these cases.

"The cruise ship outbreaks of norovirus are high profile, but it happens everywhere daycare centers, eldercare facilities, and more," said first author Vesselin T. Tomov, MD, PhD, an assistant professor of Gastroenterology. "Noroviruses can cause persistent infections, challenging the long-held view that they are transient pathogens."

The Penn investigators defined and tracked T-cell responses in mice infected with either an acute or chronic strain of mouse norovirus to gain insight into mechanisms of viral clearance and persistence. At first, they hypothesized that persistent norovirus infection caused T cells to become exhausted rendering them non-functioning, similar to other chronic viral infections such as HIV or hepatitis C. To their surprise, however, T cells remained functional even after months of norovirus infection.

The team then looked at the earliest stages of response by the immune system and found two phases to that response. During the initial days after infection, T cells reacted strongly to the virus and controlled it. But, after about three days, T cells could no longer detect norovirus in 50 to 70 percent of the mice infected with the chronic strain.

The researchers faced a paradox because the T cells responding to the virus appeared "ignorant" or "unable to see" the virus, yet there was continuous shedding of norovirus in mouse feces. To explain this conundrum, they next hypothesized that actively multiplying norovirus had been sequestered somewhere in the gut out of reach of T cells.

Tomov conducted a series of experiments to test that hypothesis. He eventually found evidence that norovirus does hide in rare gut cells that fail to communicate with T cells and alert them of the presence of the pathogen.

"We found a novel escape mechanism where norovirus becomes essentially invisible to the immune system in the intestine while still producing large amounts of virus that is shed from the intestines," Tomov said.

Coauthors at Washington University have found that norovirus hides in specialized, ultra-rare cells of the gut lining, on the order of only a few hundred cells out of the billions that line the mouse gut. These cells act as mega factories for norovirus production, while allowing the virus to evade the immune system. The team is now working on this aspect of norovirus infection.

These findings might help explain why norovirus vaccines being tested have shown limited effectiveness and also hint that future vaccines would need to elicit immunity that acts very robustly in the first three days after infection before the virus moves into hiding. The results also dovetail with the fact that no one has yet found an animal reservoir for the virus.

"There may be some people out there who are living with the chronic strain of the virus and are persistently, yet unknowingly, shedding it," Tomov said.

Next, the researchers plan to investigate how to improve protection against this virus by combining T cell and antibody approaches for vaccines. Identifying the cellular reservoir of norovirus may also enable the development of therapeutics to help prevent or purge persisting infection.

In addition, testing whether similar mechanisms occur in humans is a major goal that will not only enable better vaccine development, but also help test for a potential role of norovirus as a co-factor in other intestinal diseases.

Noroviruses Grown in Human Intestinal Cell Cultures
Noroviruses, also known as the cruise ship viruses, do not grow in laboratory cultures that ......

Noroviruses, Causative Agent of Infectious Diarrhea, Can Spread By Air
Noroviruses were found in the air at six of the eight facilities studied. Viruses were detected in ....

Noroviruses may be the Leading Cause of Diarrhoea and Vomiting
Norovirus is believed to be responsible for around a fifth of all cases of acute gastroenteritis ......

Norovirus
Norovirus or winter vomiting bug, the virus that spoils your vacation, is the leading cause of food-...