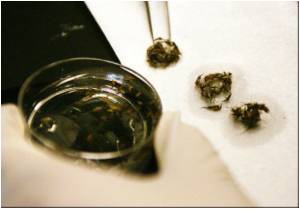 To prevent nonalcoholic fatty liver disease - the most common cause of chronic liver disease worldwide - in mice, researchers have discovered a way.

According to investigators at Washington University School of Medicine in St. Louis, blocking a path that delivers dietary fructose to the liver prevented mice from developing the condition.

First author Brian J. DeBosch, MD, PhD, clinical fellow in pediatric gastroenterology, said that there are competing hypotheses about the origins of metabolic syndrome and one of these hypotheses is that insulin resistance begins to develop in the liver first.


The research team, led by Kelle H. Moley, MD, the James P. Crane Professor of Obstetrics and Gynecology, showed that a molecule called GLUT8 carries large amounts of fructose into liver cells.
Advertisement
In this study, researchers showed that blocking or eliminating GLUT8 in mice reduced the amount of fructose entering the organ and appeared to prevent the development of fatty livers. Mice with GLUT8 deficiency also appeared to burn liver fat at a faster rate than control mice.

The study has been published in The Journal of Biological Chemistry.

Deadly Complications of Liver Disease can be Prevented by Probiotics
New research suggests that probiotics are effective in preventing hepatic encephalopathy in ......