NAFLD affects over 30% of Americans, and is characterized as a fatty liver, which can progress to an inflammatory and fibrotic liver, called nonalcoholic steatohepatitis (NASH), as well as liver cirrhosis.

The molecular causes of NAFLD and NASH are still not fully understood and, to date, no FDA-approved drug is available for NAFLD.


A major hurdle for scientists is understanding the causal relationships between NAFLD, diabetes and obesity, which are often presented together in patients and treated as comorbidities.

Without a clear understanding of their causal relationship and root cause, drug development may fail.

Faculty from Wayne State University's Eugene Applebaum College of Pharmacy and Health Sciences are leading a team of researchers to understand the causal relationships between these three diseases in hopes of developing a treatment.

Wanqing Liu, Ph.D., associate professor of pharmaceutical sciences at Wayne State, along with his collaborators from the University of Michigan, Eugene Y. Chen, Ph.D. and Cristen Willer, Ph.D., recently published the paper, "Causal relationships between NAFLD, T2D and obesity have implications for disease subphenotyping," in the Journal of Hepatology that attempts to understand the molecular causes of NAFLD.

The team conducted a large-scale genomic analysis called Mendelian randomization, a strategy similar to a randomized clinical trial that relies on a naturally occurred randomization of genetic alleles in human populations.

"We used genomic data of over 400,000 individuals obtained from a biobank in the United Kingdom, in which more than 500,000 residents have been sequenced for their genome and shared their health data," said Liu. "We also leveraged genomic data of nearly 900,000 individuals that are a part of an international consortium researching diabetes and obesity. This largest-to-date data analysis allows us for the first time to determine the causal relationship between NAFLD and type-2 diabetes (T2D), as well as between NAFLD and obesity."

The team discovered that NAFLD can be separated into at least two subtypes, those mainly caused by 'nature' (genetics) and those caused by 'nurture' (metabolic syndrome such as T2D or obesity as a primary cause).

Genetically driven NAFLD can promote the development of an atypical type of diabetes that is characterized by hyperglycemia, but not necessarily insulin resistance.

Surprisingly, NAFLD does not lead to overall obesity, but rather promotes the development of central obesity. This NAFLD subtype is also characterized by a lower blood level of cholesterol.

In the 'nurture' model, both T2D and obesity or central obesity can lead to the development of NAFLD. In this case, NAFLD may be secondary to T2D or obesity.

To further verify these findings, Liu and his team developed a genetically engineered mouse model with a human mutation created in the patatin like phospholipase domain containing 3 (PNPLA3) gene, a known genetic cause for NAFLD in humans.

Working with this model along with a team from Charlie Dong Ph.D.'s lab at the Indiana University School of Medicine, the researchers confirmed findings discovered in human genomic data.

"Further, it highlighted the importance of the development of precision medicine for both prevention and treatment of these diseases. For example, the study indicated that individuals having a high genetic risk for NAFLD may appear to be 'healthy' given that they tend to be lean, less resistant to insulin, and have low or regular blood cholesterol levels."

"However, they are likely underdiagnosed for NAFLD, leading to a higher risk of disease progression in these individuals. For the patients who have this disease subtype, drug development should be focused on targeting the genetic causes in the liver. On the other hand, people having a high genetic risk for diabetes and obesity who also develop NAFLD are likely to benefit from reducing their weight and controlling blood glucose."

The team also found that NAFLD caused by the PNPLA3 gene mutation may actually develop a late-onset type 1 diabetes rather than the typical T2D characterized by insulin resistance. While this must be further clarified clinically in human patients, it is a reminder that many T2D patients may be misdiagnosed and their treatment should be altered accordingly.

Nonalcoholic Fatty Liver Disease May Up Risk of Various Cancers
Nonalcoholic fatty liver disease (NAFLD) is associated with hepatocellular carcinoma (HCC) and also to cancers outside the liver.
READ MORE 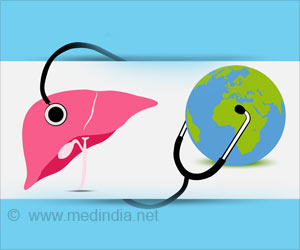