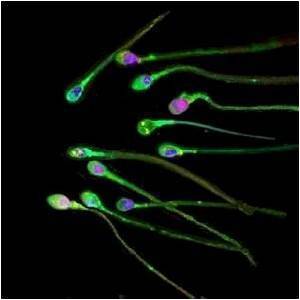 The non-stick coating of protein in semen cuts the rate of infection of immune cells by HIV, a new study has found.


SEVI seems to attract the virus and deposit it onto the surface of T-cells, components of the immune system that are the primary target of HIV infection, and may play an important role in sexual transmission of HIV.

Interactive section of Medindia explains the journey of the sperm from testis to the outside world.
Advertisement
Like the fibrous strings that bind senile plaques associated with Alzheimer's disease, SEVI is a kind of protein superstructure called an amyloid.

Jerry Yang, associate professor of chemistry at UC San Diego and his research group developed non-stick coatings for amyloids as a potential treatment for Alzheimer's disease in 2006.

Their idea was to minimize damage by preventing amyloid proteins from interacting with other molecules in the brain.

After the discovery of this new amyloid, SEVI, Yang wanted to test whether the coating strategy might interfere with SEVI's role in promoting HIV infection.

"We tested one of our molecules out on SEVI and found it was able to stop SEVI-enhanced infection of HIV in cells. It works in semen too. Something in semen enhances viral infection - SEVI and maybe other things. This molecule stops that," said Yang.

When the researchers added the molecule that forms non-stick coatings to a mix of SEVI, virus and cells, rates of infection dropped to levels observed when SEVI was absent.

They saw a similar effect with semen as well, evidence that this potential microbicide supplement works to inhibit infection within a mixture of proteins and other molecules found in seminal fluid.

The coating molecule is a modified form of thioflavin-T, a dye that stains amyloid proteins. It fits in between the individual small proteins that cluster to form SEVI and blocks SEVI's interactions with both the virus and the target immune cells.

"Other people have tried to do the same thing by targeting the virus or the cells it infects. What we do is target the mediator between the virus and the cells. By neutralizing SEVI, we prevent at least one way for HIV to attach to the cells," said Yang.

The new molecule has another advantage. Unlike many current microbicide candidates aimed at reducing HIV infection, this one doesn't cause inflammation in cervical cells.

"Recent studies have shown for the first time that a topical microbicide gel can protect women from HIV-1 infection. This is a huge step forward but not a perfect solution. We need to figure out ways to further improve protection - and our studies suggest one way of doing so. It may be possible to produce a next-generation microbicide that includes both an antiviral agent, as has been used in the past, and an agent that targets SEVI. We're very excited about exploring this idea," said the corresponding author of the report.

The study has been published in a forthcoming issue of the Journal of Biological Chemistry.

Statistics tell us that the world HIV+ population has risen drastically from 8 million in 1990 to a whopping 33 million in 2007! Even more alarming is the fact that young people (below the age of 25) account for half of these infections! This is adequate proof for the lack of awareness among the general public even in these modern times. So take our quiz and brush up on the essential facts of HIV/
Advertisement
<< Insulin Spray Could Help Treat 'Brain Diabetes'
Britain Is Second Fattest Nation In The World >>