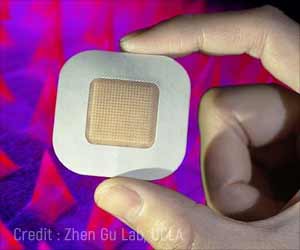 Peptide isolated from beetroot has shown promise in the treatment of hypertension, diabetes, multiple sclerosis & Alzheimer's disease due to its anti-inflammatory properties.
Advertisement
‘SugarBeat is meant to be worn only for 14 hours during the day and for 2-4 days each month.This device is not aimed at patients with type 1 diabetes or those patients with type 2 diabetes who are at high risk of hypoglycemia.’
Read More..

Neumara'sSugarBEAT device is thought to be the world's first non-invasive CGM. Faz Chowdhury, MD, Nemaura's chief executive officer said," This isn't about handing out devices and letting patients get on about it on their own accord. This is really about supporting those individuals."


He also cited a study that had shown improvement in glycemic control (blood sugar control) in type 2 diabetes patients who were instructed to perform fingerstick blood glucose testing at least 7-8 times a day for 3-4 days a month.

Chemical compounds present in chocolate, grapes and green tea inhibit coronavirus enzyme called main protease enzyme (Mpro). Researchers found that cocoa powder and dark chocolate can reduce Mpro activity to half of the original.
Advertisement
Chowdhury said," This is well-established. We're saying we can make that process a lot more scalable and affordable and convenient for the patient...The behaviour change side is digitized. We want to provide a program to help people reverse their diabetes or at least stabilize it as much as possible."

Nicholas Argento, MD, diabetes technology director at Maryland Endocrine and Diabetes, Columbia, commented "It's interesting. They're taking a very different approach. I think there's a lot of validity to what they're looking at because we have great CGMs right now, but because of the price point it's not accessible to a lot of people. I think they're onto something that could prove to be useful to a larger group of patients."

Currently available CGM is done by inserting a catheter under the skin with a needle. The new device comprises of a small rechargeable transmitter and adhesive patch. This adhesive patch contains a sensor that is placed on top of the body surface, most preferably the upper arm.

The glucose molecules are drawn out from the interstitial fluid (fluid below the skin). The sugar levels are measured at intervals of 5 mins. The readings are transferred via Bluetooth to a smartphone app.

Despite the non-invasive approach, this new device appears to be as accurate as of the traditional CGM devices.

Such conditions require at least once-daily fingerstick calibration. CGM is not indicated to replace fingerstick tests for making treatment plans.

SugarBEAT received a CE Mark in Europe as a ClassIIb medical device in May 2019. This version provides real-time glucose values that can be viewed by the person wearing it. In the US, the company submitted a premarketing approval application for the device to the FDA in July 2020.

FDA has allowed it to enter the US market as a wellness device. This won't generate real-time values but will generate retroactive reports for the physician and the patient.

Healthy eating habits and adherence to physical activity are required during COVID-19 lockdown. WHO has prepared a set of general tips that you could follow during the lockdown to stay fit and healthy.
Advertisement
<< New Optical Sensor Mimics Human Eye: Study
Vital Molecules That Coronaviruses Hijack In Humans Identifi... >>

Want to be at a Lower Risk of Diabetes  Which is Better an Eggless or Egg Rich Diet?