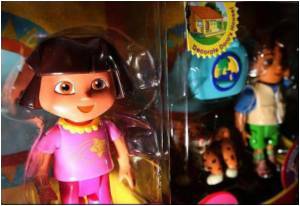 Noisy and interactive toys are much sought-after gifts this holiday season and experts have urged caution to parents when buying such toys, as some of these toys are so loud that it could cause permanent hearing damage in children.

Researchers from UC Irvine's Department of Otolaryngology measured the noise levels of two dozen popular toys in stores and purchased the 10 loudest for precise gauging in a soundproof booth at UC Irvine Medical Center. They found that all exceeded 90 decibels and several reached 100 or more, equivalent to the noise of a chain saw, subway train or power mower.

Ideally, screening tests for hearing loss should be conducted before the infant is 1 month of age.
Advertisement

"Generally, toys are safe if used properly," said Dr. Hamid Djalilian, associate professor of otolaryngology and director of neurotology and skull base surgery. "We tested the sound levels at the speaker and again at 12 inches, which is about the length of a toddler's arm."


But problems can arise if a noisy toy is held too close to the ears, he said: "Children are very sensitive to loud and high-pitched sounds. Unfortunately, hearing loss from noise damage is permanent and not currently curable."

Ear converts sound waves into electrical impulses that are transmitted to the temporal lobe of the brain through the auditory nerve. It consists of outer, inner and middle sections.
Advertisement
According to the American Academy of Otolaryngology, unprotected exposure to sounds above 85 decibels for a prolonged period can lead to hearing impairment. Two factors contribute to this, Djalilian noted: loudness and duration. The louder a sound is, the less time it takes to cause hearing loss.

He suggested that someone buying a noisy toy for a child pay attention to the speaker's location - under the item is often better than on top. Djalilian also recommended that an adult hold the toy as a youngster would and listen to its sound. "If it hurts your ears," he said, "then it's probably too loud for a child."

Hearing aid is an electronic device that helps people with hearing loss to hear more and communicate more effectively. Only 1 out of 5 people benefit from a hearing aid.
Advertisement
Advertisement
This site uses cookies to deliver our services.By using our site, you acknowledge that you have read and understand our Cookie Policy, Privacy Policy, and our Terms of Use  Ok, Got it. Close
×