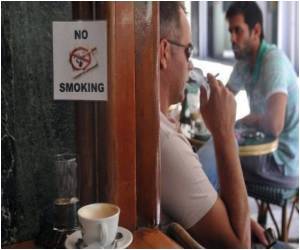 A new psychological study has found that 'no smoking' signs evoke desire in smokers and encourage them to take a puff. According to scientists, this is called the 'ironic effect' on smokers.

"You get ironic effects when you couple information that people perceive with negation," the Daily Mail quoted Brian Earp, researcher from Oxford University as saying.

"No smoking signs in particular are everywhere. If you're a smoker walking down a street you're likely to pass five or six of these signs in windows or on doors. If you have a chronically positive attitude to smoking this could boost your craving," he added.


To fortify the theory, Earp's team conducted a test on a group of smoking volunteers by showing them a number of photographs related to 'no smoking' signs.

Approximately half the smokers die due to smoking -related diseases. But it is not just the smokers who are at the receiving end. The passive smokers too, often pay a heavy price. If you still have not 'kicked the butt', learn more horrifying facts about smoking by participating in the following quiz.
Advertisement
The results showed that participants, who had earlier been shown the signs, were more drawn to smoking-related images such as ashtrays and cigarettes.

"What's interesting is the ironic effect of the negative image. No smoking signs are meant to discourage an activity but what happens is you get a kick back so that the very item that's supposed to be prohibited becomes more desirable," Earp said.

The study will be presented at the British Psychological Society's annual meeting in Glasgow.

Tobacco use in women is on the rise. The health risks of tobacco are far too many has never done a woman any good psychologically or health-wise.
Advertisement
<< Azad Calls Youth to Donate Blood Voluntarily
Stomach Bacteria DNA Can Reduce the Effects of Colitis: Stu... >>

Antioxidants to Help You When You Quit Smoking
News Archive
News Resource
Advertisement
News Category
JUUL E-Cigarettes Banned from US Market Busy Americans Get The Least Sleep At 40 Years Deepika Padukone Rushed To Hospital After Sudden Chest Pain Vegans, Vegetarians and Fish Eaters Have Better Memory Than Meat Eaters How to Reduce the Risk of Acute Kidney Injury By Drinking Coffee?
More News
Sign up for Wellness Consult a Doctor Sign up for Selfcare

More News on:
Smoking And Tobacco Diet Lifestyle and Heart Disease Cigarette Smoking - A Silent Killer Antioxidants to Help You When You Quit Smoking