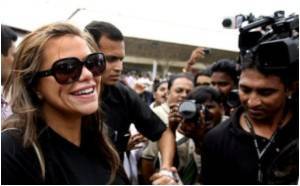 A new survey has pointed out that Britons are no longer having the stiff upper lip attitude they are famous for.

The wide-ranging 'Alternative Census' was carried out on 10,000 people by the Post Office.

Drink Driving Deaths Down in Britain

It revealed that when asked what qualities British residents associated with their own nation, one in three questioned (35 percent) cited a tendency to moan.

Breast cancer deaths dropped by more than 20 percent across 15 European countries over the last two decades, with a fall of nearly a third in Britain, according to a study published Thursday.
Advertisement
The survey also found that more than one in five said Britons were sarcastic, while others said Britain has become a nation, which likes to lodge complaints.

It also showed that rudeness and anti-social behaviour topped the list of things that irritate, with just 7 percent believing they should be proud of their modern-day manners.

"We've inherited a lot of these traits from America over the past few years as we have become a consumer-orientated society," the Daily Mail quoted Cary Cooper, Professor of Organisational Psychology and Health at the University of Lancaster, as saying.

"In a more prosperous society we expect it all to be done for us and complain when it isn't. In years gone by we'd just get on with it and do those things ourselves," Cooper added.

Western lifestyle that encourages women to over-eat, drink too much and exercise too little is responsible for high number of breast cancer cases, say new figures.
Advertisement
Advertisement
This site uses cookies to deliver our services.By using our site, you acknowledge that you have read and understand our Cookie Policy, Privacy Policy, and our Terms of Use  Ok, Got it. Close
×