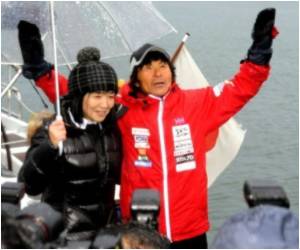 Japan's women no longer hold their position, as the world's longest-lived in 2011 for the first time in more than two decades.

The Japanese are renowned for their longevity, attributed in part to a healthy traditional diet and active lifestyle.

But the health ministry said deaths from the country's double disaster were a key factor in lowering its calculation of newborn girls' expected lifespan from 86.3 years in 2010 to 85.9.


Japanese women had had the world's longest life expectancy every year since 1985, but the latest figure put them second behind Hong Kong, where women can anticipate living to 86.7, the ministry added.

Recent data reveals that regular jogging can boost the life expectancy of men by 6.2 years and women by 5.6 years.
Advertisement
Spanish women were third at 84.9 years, followed by French at 84.8, it said.

"We can't say Japanese women's life expectancy is on course to decline (longer term) because the East Japan Great Earthquake is seen as a one-time factor," the ministry said.

A magnitude-9.0 earthquake struck northern Japan on March 11 last year and triggered a massive tsunami as well as the world's worst nuclear accident in a generation, leaving some 19,000 people dead or missing.

Source: AFP
Advertisement
<< Thinking and Behaviour Gets Affected in People With Dualist...
Special Program for Teens on Making Break-ups a Positive Ex... >>