No Health Threat from Oil Dispersants 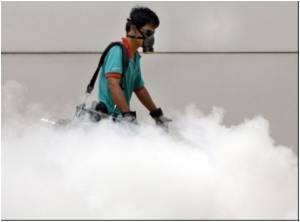 The US Food and Drug Administration has said that dispersants used to break up crude leaking from a ruptured Gulf of Mexico oil well are not likely to accumulate in seafood and affect humans.

In a letter released Friday addressing concerns raised by a US lawmaker, the regulatory body said it was highly unlikely that the chemicals used to break up spilled crude into small particles would enter the food chain.

The "FDA has determined that the chemical dispersant currently used to combat the Deepwater Horizon... have a low potential for bioconcentration in seafood species," the agency said.


"Although seafood is exposed to the dispersant, the inherent properties of the dispersants minimize the possibility of their being present in food," the letter continued.

Health Insurance Industry is a service-oriented industry with customer satisfaction and customer grievances being important components of its business operations. Both the issues - Customer satisfaction and Customer Grievances have been described in the article in co-relation with the health insurance sector.
Advertisement
"There is no information at this time to indicate that they pose a public health threat from exposure through the consumption of seafood."

The letter came in response to concerns raised by Representative Ed Markey, who chairs the House Energy and Environment subcommittee.

Some 1.84 million gallons of dispersant have been used to tackle crude spilling from a Gulf of Mexico well ruptured by an April 20 explosion that ripped through the BP-leased Deepwater Horizon rig, killing 11.

The rig sank two days later, and thick, noxious crude soon became visible at the ocean surface, where dispersants were first used to begin breaking the oil down.

BP then applied for and received US government permission to apply dispersants deep below the sea surface, at the site of the leak some 5,000 feet down.

The latest figures from the Joint Command Center overseeing the spill response say 1.07 million gallons of chemical dispersant was applied on the ocean surface and 771,000 sub-sea.

Markey has questioned the safety of the chemicals, accusing BP of "carpetbombing" the area with formulas of uncertain safety.

He said the FDA's reassurance was "good news" and "a great first step in restoring public confidence in the safety of seafood from the Gulf region."

But he cautioned that "many significant questions still remain on the long-term consequences that these dispersant chemicals will have on the marine food chain.

"Now that the oil has stopped flowing vigilance in monitoring must continue to ensure that tainted seafood never makes it to the dinner table," he said in a statement.

BP crews have completed a cementing process that should seal the well permanently from the top, but plan an additional "kill" procedure undertaken via a relief well drilled to intercept the damaged well under the sea bed.

Accident and Trauma Care Nutam (400mg) (Piracetam) Color Blindness Calculator The Essence of Yoga Find a Doctor A-Z Drug Brands in India Turmeric Powder - Health Benefits, Uses & Side Effects Calculate Ideal Weight for Infants Blood Pressure Calculator Drug - Food Interactions
This site uses cookies to deliver our services.By using our site, you acknowledge that you have read and understand our Cookie Policy, Privacy Policy, and our Terms of Use  Ok, Got it. Close
×