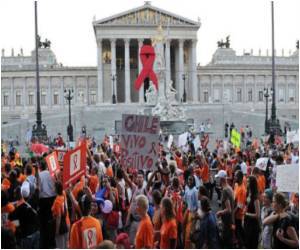 Although more help is needed by Africa's poorest women in the fight against AIDS, campaigns should not be boring, urged Auma Obama, the half-sister of US President Barack Obama.

"In Africa, it is necessary above all to learn to say no," she said on the sidelines of the 18th International AIDS Conference in the Austrian capital.


"It will not be until young women become aware of what it is possible for them to do that they will be empowered to change things," she said, calling for more help for the poorest people in Africa, particularly women, to take their destinies into their own hands.


Auma Obama, who has the same father as the US president but did not grow up with him, helps US charity CARE's anti-AIDS efforts in her native Kenya and was in Vienna to present a report on its activities.

"Above all it is necessary to stop campaigns from becoming boring," she added.

She was joined at the news conference by CARE's president Helene Gayle, who is Barack Obama's chief AIDS advisor.

Auma Obama, who addressed the news conference in fluent German, is a development worker in Kenya where she participates in information campaigns and youth participation events.

Cuba to Highlight Volunteers' Efforts on AIDS Day
Cuba will launch a campaign on the World AIDS Day December 1 to highlight the work of volunteers and social activists in the prevention of the scourge.
READ MORE

Africa's Men Urged to Step Up AIDS Fight
South Africa's top female politician warned Saturday that men must get fully involved in the war against HIV/AIDS if the disease is to be defeated.
READ MORE