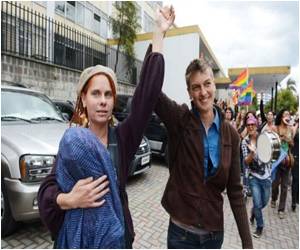 A new study has revealed that lesbians hold hands better than straight people.

In a study published in the Journal of Homosexuality, Lesbians were found to hold hands better than straight people without allowing power and dominance to creep in.

On the contrary, when straight people hold hands, it is influenced by power and the couple does play power games. This is not the case among lesbians.


Hand holding may seem like a simple act of showing affection, but it certainly is one of the most ancient forms of power play between humans.

It is always the case that when a couple holds hands, one person among them is the first to initiate holding hands and the other person in the couple actually slips their hand in to make it fit. In heterosexual relationships, when men and women hold hands, men usually adopt the dominant position. But in the case of lesbian couples, there appeared to be no power play especially when it came to holding hands.

"Our results suggest that hand-holding position does not reflect a dominance or power differential between partners, at least within a female-female relationship," the researchers said.

Belgium Attracting French Lesbians Who Want to Conceive
Thousands of French lesbians are traveling to neighboring Belgium to conceive babies which would ......