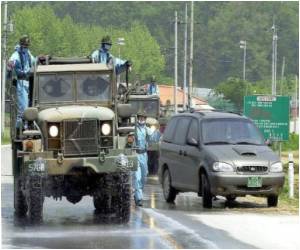 The Food and Agricultural Organisation (FAO) and World Organisation for Animal Health (OIE) sent veterinarians specialising in foot-and-mouth to assess the situation, help contain outbreaks and stop it spreading.

North Korea confirmed last month that it had been hit by the highly contagious disease, which experts believe started at the end of last year.


In February, the Rome-based FAO said it had received a formal request for assistance from the secretive communist country, which it said had suffered at least 48 outbreaks, affecting thousands of animals.

Three new cases of foot and mouth disease have been reported in S.Korea, the environment ministry said on Monday, bringing up the total to 56 since the country's worst outbreak began a month ago.
Advertisement
North Korea suffers persistent severe shortages of food likely to be worsened by livestock disease.

Although humans are not at risk, "affected animals become too weak to be used to plough the soil or reap harvests, and farmers cannot sell the milk they produce, which can severely impact household food security," the FAO said.

The mission, which began on February 28, will last approximately 10-14 days.

Japan discovered a suspected case of foot-and-mouth disease in a cow in its southern prefecture of Miyazaki, just days after it lifted a state of emergency, an official said.
Advertisement
<< Tanning Bed Exposure Can be Fatal
Clean Fuel Creates Negative Impact on Climate Change >>