A team of physicians at Ben-Gurion University of the Negev has discovered that a nightly dose of vitamin B12 is a simple, effective and low risk therapy to prevent Recurrent Aphthous Stomatitis (RAS), better known as "canker sores."

According to lead researcher Dr. Ilia Volkov, "the frequency of RAS is as much as 25 percent in the general population, however, until now, there has been no optimal therapeutic approach."

The findings were reported in the January/February issue of the The Journal of the American Board of Family Medicine 22 (1): 9-16 (2009). Dr.Volkov is a primary care physician in the Clalit Health Services and lecturer in Ben-Gurion University's Department of Family Medicine in its Faculty of Health Sciences.


The researchers tested the effect of vitamin B12 on 58 randomly selected RAS patients who received either a dose of 1,000 mcg of B12 by mouth at bedtime or a placebo, and were tested monthly for six months. Approximately three quarters (74 percent) of the patients of the treated group and only a third (32 percent) of the control group achieved remission at the end of the study. According to the research, "The average outbreak duration and the average number of ulcers per month decreased in both groups during the first four months of the trial. However, the duration of outbreaks, the number of ulcers, and the level of pain were reduced significantly at five and six months of treatment with vitamin B12, regardless of initial vitamin B12 levels in the blood. During the last month of treatment a significant number of participants in the intervention group reached 'no aphthous ulcers status' (74.1% vs 32.0%; P < .01)." The treated patients expressed greater comfort, reported less pain, fewer ulcers, and shorter outbreaks during the six months while among the control group the average pain level decreased during the first half of the period but increased during the second half. 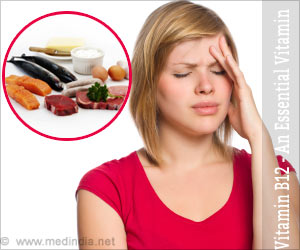