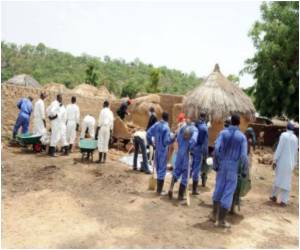 The cholera epidemic in Bauchi, Nigeria's northern state has claimed more casualties with the number rising from 47 to 67 in the past one week, health officials have stated.

"We have recorded 20 more deaths in the last week from cholera outbreak. The death toll now stands at 67 in the last eight weeks," Musa Dambam, director of Bauchi Primary Health Care Development Agency told AFP by phone from Bauchi.


"Infection has risen from 1,200 patients to 1,742. The increase in the death and infection figures was as a result of drinking of contaminated water," he said.


Dambam said that heavy rains had washed contaminants into ponds and wells.

"We have intensified health campaigns on the radio, urging people to boil their water before drinking," he added.

These figures bring cholera death toll in Bauchi and Borno states to 107 while a total of 1,857 people have been infected by the water-borne disease also in the two states.

Cholera can also be transmitted by food that has been in contact with sewage.

Health experts say a surge in cholera outbreaks is noticeable in Nigerian villages in the rainy season when rainwater washes dirt into open wells and ponds which most villages rely on for drinking.

Mapping of Neglected Tropical Diseases Needed
A new editorial in an eminent journal says that mapping of neglected tropical diseases (NTDs) is critical to control and elimination efforts.
READ MORE