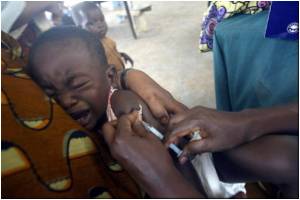 A village in Nigeria becomes front line in measles fight, where a man dressed in a turban and caftan walks the streets delivering a warning message.

"If you don't want your child to die or suffer deformities like deafness or blindness, you better take your child to be immunised," broadcasts Gado Maibuji, recruited by local officials to deliver the anti-measles message.

With the global effort to eradicate polio seeing major gains, international health agencies have also been highlighting the fight against measles, the highly contagious disease that kills over 160,000 children each year.


It is preventable through vaccination, and nearly all of the deaths occur in what are considered low-income countries with poor health infrastructure.

Auckland has reported an outbreak of measles that arrived with infected travelers on an Emirates flight from Brisbane nearly a month ago and is spreading very quickly.
Advertisement
India is the hardest hit and Nigeria, despite its major oil wealth, is also at high risk, reporting 14,271 suspected cases and 7,754 confirmed last year, resulting in 151 deaths.

As Africa's most populous nation, with 150 million people, Nigeria is a key battleground in the fight against measles, which it carries out with support from the United Nations Foundation.

"Nigeria is crucial in this campaign due to its high birth rate," said the UN Foundation executive director for children's health, Andrea Gay, during a tour of an anti-measles drive in Rijiya village in northern Zamfara state.

Measles is a viral respiratory infection spread through oral droplets, with symptoms including fever, cough, runny nose, conjunctivitis and rashes.

With an incubation period of up to two weeks, it is highly contagious and an infected child can set off a chain reaction that sees the virus spread rapidly through a neighbourhood.

Confronting measles through immunisation is part of a global strategy of addressing child-killing diseases, with polio having long been a major focus.

"We don?t have to wait until the last polio virus is routed before we tackle measles, as doing so will be disastrous because measles will have spread all over," Gay said.

Unlike many African nations, Nigeria covers more than two-thirds of the costs of its measles vaccination campaigns, according to the UN Foundation.

The United Nations body lends financial as well as technical support, including to a $30-million campaign under way in Nigeria. (recently)??

Globally, a multi-million-dollar initiative managed by the UN Foundation has been highly effective in reducing measles mortality.

It began in 2001 and involves four other international donors -- the World Health Organisation (WHO), UNICEF, the American Red Cross and the US Centres for Disease Control.

Experts warn that any halt in the campaigns could undo the success recorded in the fight so far.

With poor routine immunisation, many Nigerian children do not receive measles vaccinations; those who are immunised often only get a single dose, leaving them vulnerable since two doses are needed for proper resistance.

The problem is compounded by families' reluctance to take their children to immunisation centres.

"They are used to house-to-house polio immunisation where health workers meet them in their homes and immunise their children," said Safiya Ismail, a WHO immunisation officer.

"But in the case of measles, we are asking them to bring their children to us and many are reluctant."

Local authorities provide soaps and candies as incentives to lure mothers and children to centres, while workers in communities travel the streets with megaphones to sensitise families on the importance of vaccination.

"The soaps and candies do the magic," Ismail said. "Mothers are enticed by the free soaps and children by the candies and the strategy works effectively."

The incidence of polio has gone down by 98 per cent, reports Nigeria and the UN has given the assurance of extending another 60 million dollars for more vaccines.
Advertisement
<< Flexibility of Adult Stem Cells
Amyloid Plaques - Early Sign of Alzheimer's Disease >>