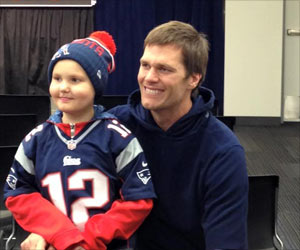 Most children wish to get surprise gifts from Santa Claus on Christmas. Similarly, an 8-year-old girl who is battling with Leukemia also wanted to get a surprise, not from Santa but her favorite star Tom Brady.

Hailey Steward is fighting leukemia for the second time at a hospital in Portland, Maine. She entered remission after braving a two-year battle with the cancer.

Eminem fulfilled a 17-year-old fan's wish by visiting the teenager's place after he got to know that he suffered from Osteosarcoma, a rare form of bone cancer.
Advertisement
‘NFL star, Tom Brady fulfills the dream of an eight-year-old girl battling with leukemia by sending her a video invitation to meet him at the Gillette Stadium, Foxborough, Massachusetts.’

To fulfill the little girl's wish, New England Patriots quarterback, Tom Brady has turned himself to a Santa by sending her a video invitation to meet him at Patriot Place in Foxborough, Massachusetts.


"Hi, Hailey. Merry Christmas, it's Tom Brady. I heard you had a special Christmas wish that you wanted this year, and I've got one, too. I was hoping you'd be willing to come down here this Saturday before we leave for New York, and I get a chance to meet you," the NFL star says in the video posted on Facebook.

In an endearing gesture, Spanish football club Villarreal fulfilled a 13-year old cancer patient's dream of playing for the club.
Advertisement
Her joy knew no bounds when she met her NFL star and hugged him. He also took her on a tour to the Gillette Stadium along with her parents. His dad was overwhelmed by the act of Tom Brady and posted a message on Facebook.

"As a Dad this was truly one of the most amazing days of my life to see my girl get her wish. My little Hailey is so strong and to see someone like Tom Brady recognize her strength and determination to beat this again is awesome."

Doctors often judge advance directives to be unclearly worded and not applicable to the patient's current situation.

Noscaphene (Noscapine) Sanatogen Find a Hospital Nutam (400mg) (Piracetam) Daily Calorie Requirements Accident and Trauma Care Pregnancy Confirmation Calculator Indian Medical Journals Drug Side Effects Calculator Blood Donation - Recipients
This site uses cookies to deliver our services. By using our site, you acknowledge that you have read and understand our Cookie Policy, Privacy Policy, and our Terms of Use