Neymars Dizzying Runs may be Done on Auto-Pilot 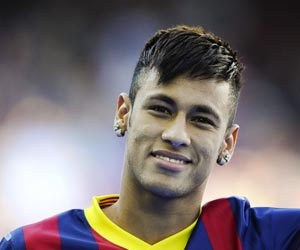 A team of Japanese neurologists suggest that Brazilian football superstar Neymar may be on autopilot when dancing past opponents as his brain activity is less than 10 percent the level of amateur players.

Results of brain scans conducted on Neymar in February this year indicated minimal cerebral function when he rotated his ankle and point to the Barcelona striker's wizardry being uncannily natural.

It is a myth that the brain quits generating new cells once you reach adulthood. They are regenerating all the time.
Advertisement

"From MRI images we discovered Neymar's brain activity to be less than 10 percent of an amateur player," researcher Eiichi Naito told AFP on Friday.


"It is possible genetics is a factor, aided by the type of training he does."

The findings were published in the Swiss journal Frontiers in Human Neuroscience following a series of motor skills tests carried out on the 22-year-old Neymar and several other athletes in Barcelona in February this year.

An active brain can certainly help in improving memory by strengthening the connections between neural impulses in brain.
Advertisement
Three Spanish second-division footballers and two top-level swimmers were also subjected to the same tests, added Naito of Japan's National Institute of Information and Communications Technology.

Naito concluded in his paper that the test results "provide valuable evidence that the football brain of Neymar recruits very limited neural resources in the motor-cortical foot regions during foot movements".

Asked whether Neymar's Barcelona team-mate Lionel Messi or Real Madrid's Cristiano Ronaldo might display similar test results, Naito said: "It is fair to assume they would show similar levels given their footwork and technique."

Naito told Japan's Mainichi Shimbun newspaper: "Reduced brain activity means less burden which allows (the player) to perform many complex movements at once. We believe this gives him the ability to execute his various shimmies."

Neymar carried the hopes of host nation Brazil on his shoulders at the recently ended World Cup but his involvement ended in tears as he fractured a vertebra in the 2-1 quarter-final victory over Colombia.

Without their talisman, who had scored four goals in the tournament, Brazil suffered their most humiliating defeat ever when they were pulverised 7-1 by eventual champions Germany in the semi-final.

Neymar is the Justin Bieber in Football Cleats

First comes God, then family and then Neymar, says 17-year-old Rayellen Andrade, wearing the yellow Brazil team jersey with her idol's name across the back.
Advertisement

Brazilian football star Neymar poses shirtless for a selfie with his girlfriend.
Advertisement