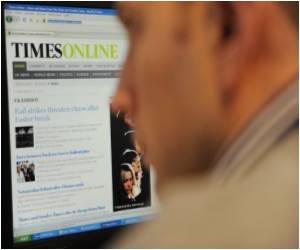 News absorb more time than a decade ago in America where people have added online news to the traditional media of print, radio and television, concluded a new survey.

The survey by the Pew Research Center for the People and the Press found that Americans spend an average of 57 minutes a day getting news from print newspapers, radio and television, the same amount of time as in 2000.

Is This The End of the 'Free News' Culture: NYT to Charge Its E-Readers

With The New York Times and Rupert Murdoch poised to start charging for newspapers online, media heavyweights sparred on Thursday over whether readers will pay for news on the Web.
Advertisement

"But today, they also spend an additional 13 minutes getting news online, increasing the total time spent with the news to 70 minutes," Pew said.

US Newspapers Look To E-Readers For Survival

As US newspapers drown in a sea of red ink, publishers are desperately searching for ways to survive in a digital future.
Advertisement
Pew said the news consumption totals did not include Americans who get news on cellphones so the likely average amount of time exceeds 70 minutes.

Pew said 83 percent of Americans get news in one form or another on a daily basis while 17 percent reported consuming no news at all.

Only nine percent of those surveyed said they got news through the Internet or mobile devices without also using traditional sources.

Twenty-six percent of those surveyed said they read a print newspaper the previous day, down from 30 percent two years ago and 38 percent in 2006.

Online newspaper readership is growing, the survey found, with 17 percent of Americans saying they visited a newspaper website the previous day, up from 13 percent in 2008 and nine percent in 2006.

The survey also found that more Americans are using Internet search engines to track down news on topics of interest. Thirty-three percent said they regularly use search engines to find news, up from 19 percent in 2008.

Thirty-one percent of those surveyed said they access the Web with their mobile phone but just eight percent said they regularly use the device to get news.

The survey was conducted between June 8 and June 28 and has a margin of error of plus or minus 2.5 percentage points.