Newlyweds Offered Cash to Delay Having Children in India 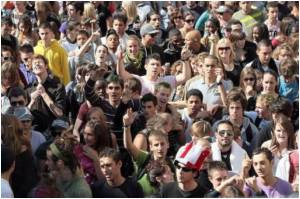 Couples in one part of India are getting cash to delay having kids.

Maharashtra state is paying newlyweds a so-called "honeymoon" bonus to delay starting a family, with the twin aims of slowing population growth and improving women's health.

Rajia Sayad was 20 when she married her husband Shakil in 2007. The couple lives with his parents in Shendurjane village in Satara district, about 250 kilometres (155 miles) from the state capital, Mumbai.


Money is tight and not always regular. Rajia is an unpaid housewife and Shakil is a musician, earning 200 to 2,500 rupees ($4.40 to $55) a month during the wedding season. His father earns about 3,000 rupees a month selling fruit.

When the fertilization of the ovum occurs in a place other than the uterus, the condition is called ectopic pregnancy. This is a life-threatening condition, ectopic pregnancy surgery can help.
Advertisement
The young couple signed up for the scheme soon after they were married.

"We didn't want a child so soon," she told AFP. "Our circumstances weren't so good. I was also feeling physically weak and I didn't want any problems with the child in the future. That's why we took the decision."

Rajia and other women like her were attracted by the offer of 5,000 rupees in cash if they stayed childless for two years after their nuptials. If they hold out for another year, they receive an extra 2,500 rupees.

The scheme is voluntary: the only conditions being that the marriage has to be registered with the government and that participants sign a consent form confirming that they are taking part of their own free will.

Over the first two years, couples have to attend compulsory counselling and education classes every three months.

The sessions include family planning advice. Free condoms and the oral contraceptive pill are available. Even abortions can be arranged.

India's population jumped to 1.21 billion in 2011 from 1.02 billion in 2001, according to provisional census figures released last month.

The family remains the cornerstone of Indian society, particularly in more conservative rural areas, with children seen as a guarantee of future income and support where little or no state help exists.

Sanjay Gandhi, son of the then prime minister Indira Gandhi, made attempts to control population growth in the 1970s, but his sterilisation scheme was so controversial that no serious nationwide project has been attempted since.

Doctors at the state health authority in Pune say four out of every 10 brides in Maharashtra are under 18 -- the legal age of marriage.

In Satara district, brides are typically aged 19 and more than 80 percent conceive within a year.

Dr Prakash Doke said schemes to encourage later conception were vital because of the impact of childbirth on young women.

"If the age of the girl is less than 18 or less than 20, the chances of maternal mortality and the new-born death rate are very high," he said.

Thirty-one out of every 1,000 children born in Satara district die before their first birthday.

In India as a whole, around 254 women died from pregnancy-related causes out of 100,000 live births in 2008, according to a study published last year in the British medical journal The Lancet.

"The in-laws don't think that their daughter-in-law is still small, isn't old enough and her body hasn't fully developed yet. They don't like all this (the scheme). They just want a child," she said.

Nearly 4,300 couples, though, have challenged tradition and signed up for the "honeymoon" project since its inception in 2007. Close to 1,200 have completed the programme. Some 150 couples have dropped out.

The project is due to end next year but three other districts in Maharahstra are now looking to start their own. The initiative has also attracted interest from Madhya Pradesh in central India and Jharkhand in the east.

As for Rajia and Shakil, the couple still plans to have children at some point -- ideally a boy and a girl -- but only when the time is right.

"If you have a child you should be able to take care of it, right?" said Rajia.

Blood - Sugar Chart Blood Pressure Calculator How to Reduce School Bag Weight - Simple Tips Accident and Trauma Care Post-Nasal Drip Sinopril (2mg) (Lacidipine) Daily Calorie Requirements Color Blindness Calculator Drug Side Effects Calculator The Essence of Yoga
This site uses cookies to deliver our services. By using our site, you acknowledge that you have read and understand our Cookie Policy, Privacy Policy, and our Terms of Use