Newly Married Couples Must Read This 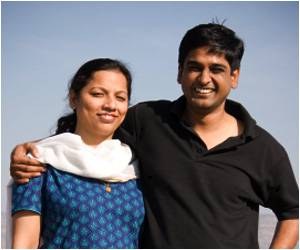 A recent study has found that couples kiss almost 31 times a week between their first and second anniversaries.

According to the study, lovers typically kiss 21 times a week. But the actual number varies as the relationship evolves, the Daily Express reported.

In the first six months, couples kiss 25 times a week, reaching 31 in their second year, falling to 19 after five years.


One in 20 British adults never kisses his or her other half, the Heathrow airport study found.

Phones That Let You Feel Your Lover's Kiss on the Anvil

With the development of a series of phone prototypes, sharing a kiss with your own phone could be a possibility.
Advertisement
<< Are You Obsessive About Your Cellphone ?
Risk of Type 2 Diabetes High for Women Who Sit for Up to 7 ... >>

A Chinese woman hit upon a novel idea to raise awareness the hepatitis B virus carriers.

One in Five Couples Stop Kissing After Marriage