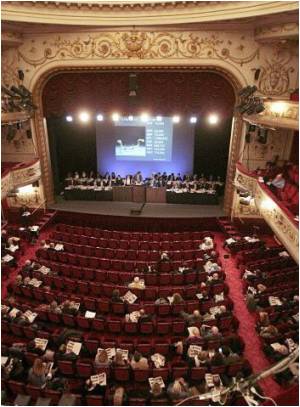 New York City-based Christie's auction house is hoping to set new world records with a Picasso valued at $140 million and a Giacometti worth $130 million, as New York's spring auction season kicks off.

Pablo Picasso's colorful "The Women of Algiers (Version 0)," depicting a scene from a harem, will be up for grabs when Christie's puts it on the auction block May 11.
Advertisement

The same goes for Alberto Giacometti's bronze statue "Man Pointing," of which there are only six casts in the world.


"Those two works can set a world record," said Loic Gouzer, senior vice president of Christie's. "You don't have another chance to get them."

The painting and statue are the flagship works at the evening sale entitled "Looking Forward to the Past," which will see 35 pieces of art created between 1902 and 2011 auctioned off.
Advertisement
The rising price of artwork at auctions is attributed to a growing number of wealthy, private investors around the world, experts say.

Giacometti's nearly six-foot (1.8-meter) depiction of a wiry man holding up one hand and pointing with the other is the artist's "most celebrated sculpture," Gouzer said.

Meanwhile, Picasso's nearly four-by-five-foot canvas is "a masterpiece at the level of 'Guernica' and 'Les Demoiselles d'Avignon,'" Gouzer said.

"He painted several versions until he got this one," he added.

Picasso created the painting in 1955, inspired by 19th-century French painter Eugene Delacroix, but as a homage to Henri Matisse, who died in November 1954.

The work is one of the last major paintings by the Spanish master in private collection.

The world record for a painting sold at auction is $142.4 million for Francis Bacon's "Three Studies of Lucian Freud," which was snapped up in New York in 2013.

And the record for priciest sculpture is already held by Giacometti, whose "Walking Man I" sold for $104.3 million in London in 2010.

- 'Among biggest sales ever' -

Also up for grabs to the highest bidder will be a painting from Claude Monet's "The House of Parliament" series, expected to bring in between $35 million and $45 million, and Mark Rothko's 1958 "No 36, Black Stripe," with an estimated value of $30-$50 million.

Among them are six Monets, all from private collections, with an estimated value of $110 million, including a "Water Lilies" painting valued at between $30 million and $45 million.

Another star of the evening will be Vincent Van Gogh's 1888 "Les Alyscamps," created during his time in Arles, France and worth more than $40 million.

At a Sotheby's auction of contemporary art on May 12, works worth about $320 million will be sold in 65 lots, to include works by Rothko, Roy Lichtenstein and Gerhard Richter.

Michael Macaulay, a contemporary art specialist for Sotheby's, called the auction "one of our biggest sales ever."

'Casablanca' Piano Fetches $3.4 Million at US Auction
The painted upright piano that was used in the classic movie "Casablanca" to adorn Rick's Cafe, was ...

Wine Auction Breaks Single Lot Record in Hong Kong
Sotheby's has said that an auction in Hong Kong broke the world record for the most expensive lot .....

Princess Diana's Gowns Up for Auction in US
Four dresses designed for and worn by Britain's late Princess Diana are to go under the hammer in .....