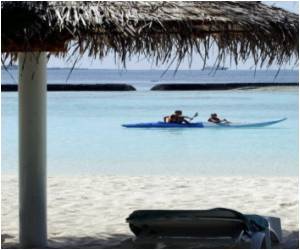 The latest New York attraction for tourists and locals alike is Echo, the mysterious and monumental sculpture of the face of a girl -- the work of Spanish artist Jaume Plensa.

Standing alone on the lawn of Madison Square Park, and surrounded by historic and stately limestone buildings, the long, white sculpture represents the pensive and dreamy face of the 9-year-old daughter of a restaurant owner who lives near Plensa's home in Barcelona.

"I just walked through the park and saw it. Looking at this gives you a sense of peace. So it's beautiful to put that in a public place, to remind people of this inner sense," said Allen Steinfeld, a longtime New Yorker.


The 44-foot (13 meters) sculpture, newly installed on the park's spacious lawn, will be on display until mid-August.

"The contrasts are very beautiful," said Anselmo Pantoja, a 59-year-old Brazilian on vacation with his wife. "It's great because it's different. We crossed the park just to see it."

Medical Tourism has become a serious enterprise in India over the last two years. However some hospitals have been practicing it for quite a few years.
Advertisement
Installation took three days, according to the website of the Madison Square Park Conservancy.

"Both monumental in size and inviting in subject, the peaceful visage of Echo creates a tranquil and introspective atmosphere amid the cacophony of central Manhattan," the park's website said.

One of the key features of the sculpture is that its visual impact changes depending on the vantage point from which it is viewed.

"It looks almost two dimensional but it's three dimensional. It gives this sense of different perspectives of the world," Steinfeld said.

Sator, who is Japanese but works in New York, noted that while walking around the sculpture, "the dimension changed little by little.

"It's a little bit like a Buddhist idol. It looks Japanese or Chinese," he said.

Plensa, born in Barcelona in 1955, has won several awards throughout his career, including the medal of Chevalier des Arts et des Lettres in France, the National Arts Prize of the Catalan government and a Doctor Honoris Causa degree from the School of the Art Institute of Chicago.

One of his most notable works is the Crown Fountain in Chicago's Millennium Park, which opened in 2004 and consists of a black granite reflecting pool placed between a pair of 50-foot (15-meter) towers that project a video image toward the other.

How to Choose the Best Eczema-Friendly Moisturizer for Children?
View all
News Archive
News Resource
Advertisement
News Category
New Self-Powered Fabric Helps Correct Your Posture in Real-time! Harm Reduction in Current Tobacco Control Treaty  WHO's Critique Tobacco Epidemic Continues and is Far From Endgame Summer Camps: Safety Not Always a Priority for Most Parents International Tea Day: 5 Destinations to Celebrate This Day
More News
Sign up for Wellness Consult a Doctor Sign up for Selfcare