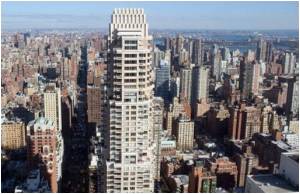 New York City's mayor on Monday unveiled a plan to revitalize hundreds of miles of shoreline, expand ferry services and boost the shipping industry in the Big Apple.

Mayor Michael Bloomberg's plan calls for the long-term development of industrial and tourist potential along the maze of waterfronts in and around the most populous US city.

Over the next three years, some 20 hectares (50 acres) of waterfront parks are planned, along with a new ferry service linking Manhattan to the outer boroughs. The projects are predicted to create 13,000 construction jobs and more than 3,400 permanent jobs, the mayor's office said.


The long-term component calls for development along the city's 520 miles (837 kilometers) of shoreline over the next decade.

"New York City has more miles of waterfront than Seattle, San Francisco, Chicago, and Portland combined, but for decades, too many neighborhoods have been blocked off from it," Bloomberg said.

A smartphone application which will help users find the nearest location where condoms are available for free , has been launched on Valentine's day.
Advertisement
He promised "one of the most sweeping transformations of any urban waterfront in the world" that will make New York "one of the world?s premier waterfront cities."

City Council Speaker Christine Quinn said New York, which was founded by seafaring European settlers, then populated by immigrants, owed its "greatness" to its connections to water.

"But at some point in our history, we both literally and figuratively turned our back on the waterfront. Now we?ve made a decision to more fully embrace the waterfront," she said.

New York borders numerous bodies of water, including the Hudson River, Long Island Sound, the Atlantic Ocean and the famous harbor where immigrants once disembarked at Ellis Island.

Officials attending the unveiling of the plan said that improvements would range from kayaking facilities to freight infrastructure for Brooklyn's container port.

"The waterfront represents an enormous opportunity for economic growth throughout the five boroughs," Seth Pinsky, head of the city Economic Development Corporation, said.

"Developing our waterfront infrastructure, so that we can expand industries like container shipping, will allow us to stay competitive with other waterfront cities around the world."

New York's City Council on Wednesday approved a law that extends smoking ban to municipal parks, beaches and other zones such as Times Square.
Advertisement
<< Oz Girl Cancels Facebook Party After 20,000 Claimed They Wo...
Most Expensive Address in the World - Severn Road, Hong Kon... >>