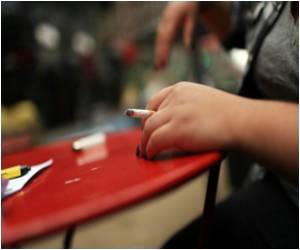 In some surprising news, New York Mayor Michael Bloomberg might be surprised to hear there's a tobacco plantation right under his nose.

The rebel crop consists of 100 potted plants lined up in the Brooklyn garden of Audrey Silk, a sort of smokers' guerrilla leader who intends to fight the mayor to the last puff.

Silk, a chain-smoking former police officer of 46, says each crop of baccy produces about 400 packs of cigarettes and -- unlike the $12-15 store packs in the city -- not a penny goes into Bloomberg's tax coffers.


"This is called 'Screw You Bloomberg Garden'," Silk says with a mischievous look.

Smoking kills the smoker silently, pushing him towards serious illnesses, which slowly lead to death.
Advertisement
Last month he signed a law extending the smoking ban already in offices, bars and restaurants to include swaths of the outdoors.

When it takes effect in May the law will prohibit lighting up in parks, beaches and even busy gathering places like Manhattan's Times Square -- taking the ban within flirtation distance of forbidding cigarettes in the street.

"Smoking in parks and beaches not only harms people trying to enjoy these recreational facilities, it also causes a litter problem that harms the beauty of our parks," Bloomberg said.

The city has raised taxes on tobacco in an attempt to price cigarettes -- now some of the most expensive in the United States -- out of reach. It is also behind an advertising campaign showing gruesome anti-smoking pictures and a TV spot with a boy crying for his missing parent.

Confronting that onslaught is Silk, a smokers' champion so passionate that she could almost catch fire herself.

Casting herself as a civil rights campaigner, not just someone who wants to indulge an unhealthy habit, Silk says her garden is a way of showing meddling officials her mind.

"This was my revolt against intrusive government control of my life," Silk said in the smoke-filled kitchen of the house she shares with Bingo the terrier, Albert the chatty African Grey parrot, and a basement-full of dried tobacco leafs.

"We compare it to Nazism -- it's when you try to turn a group of people into pariahs so that you can control them."

When the outdoors ban comes in, Silk plans to lead her insurgents in direct confrontation with park police and threatened $50 fines. "We're having a smoke-in, a smoke in the park," she said. "It will be an outright defiance of the law."

The idea of growing her own tobacco to circumvent taxes on store tobacco is not for the faint-hearted and even Silk admits she knows of no one else in the city who has taken the radical step.

The plants grow from tiny seeds bought over the Internet and must be nurtured with bagged soil as well as protected from the weather and pests.

The big, floppy green leaves require washing, then drying in the basement where they hang from row on row of washing lines. After that, the leafs still have to be compacted into bricks, chopped, then put through a meat grinder, whereupon they are finally ready to be rolled into cigarettes.

The end result, Silk admits, "is definitely a little harsher than store-bought. It's about like going from a Parliament to a Marlboro."

The financial gains for a dedicated smoker are considerable -- about $8,000 saved for each 100 plants' worth of cigarettes, she estimates.

"But it's more of a political message," she wants to stress.

Silk is something of a celebrity in New York. While talking to AFP at her house, her phone rang repeatedly as other journalists called for interviews.

The notoriety makes her a little jumpy. She refuses to say how many cigarettes she smokes a day or even when she took up the habit, saying darkly that "the anti-smokers always like to use that to attack."

The snappily named lobby group she founded C.L.A.S.H -- Citizens Lobbying Against Smoker Harassment -- does its best to stem what in many cities around the world is an irreversible trend.

The website, www.nycclash.com, sports a grainy photograph of a City Council member who sponsored the parks smoking ban. The politician is talking on a cellphone right under a sign that purportedly reads cell use "prohibited".

A "statement" from Silk appears over the photo pronouncing that the parks ban will be given as much respect as much as the council member "pays to rules herself."

Silk's campaign is unlikely to be stubbed out any time soon. Whether many will follow her into battle when the parks ban takes effect is another question.

But she does have at least one dedicated follower: Albert the parrot.

As soon as Silk fires up another cig, Albert, a brilliant mimic, takes his cue.

"Tshk-tshk," he says. The sound is the perfect reproduction of a lighter.

Tobacco use in women is on the rise. The health risks of tobacco are far too many has never done a woman any good psychologically or health-wise.
Advertisement
<< Rising Cases of Tuberculosis of Spine Cause Concern
How to Make Skinny Worms Fat and Fat Worms Skinny, UCSF Tea... >>