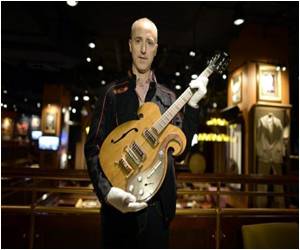 A well-heeled Beatles fan may cry with happiness with this guitar, though he may not quite gently weep.

The VOX guitar played both by John Lennon and George Harrison is expected to sell for between $200,000 and $300,000 at auction in New York's Hard Rock Cafe on Saturday.

The custom-made instrument is the main lot in the Julien's Auctions sale.


Harrison used it while practicing "I am the Walrus" and Lennon while recording a video session for "Hello, Goodbye." It was given by Lennon to Apple Records electronics engineer Yanni "Magic Alex" Mardas in 1967, Julien's said.

It's a "once-in-a-lifetime opportunity to own one of the rarest pieces of Beatles memorabilia ever to be offered," the auction house said.

Beatles Re-Invented: Now On A VideoGame
The Beatles rock-and-roll invasion that conquered the music scene in the 1960s has been reborn in a ...

Scientists Explore The 'Beatles' Cues In Memory
Psychologists at Leeds University are aiming to study the effect of musical memory on shaping a ......