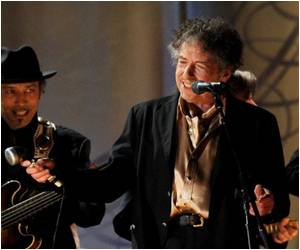 An exhibition of 40 drawings, limited editions and paintings on sale for $2,500 to $400,000 each marked the New York art gallery debut of legendary musician Bob Dylan.

The artwork comes from the "Drawn Blank Series" of sketches done by Dylan between 1989 and 1992, for example of a railroad track, a woman's back, a still life.

Black and white versions of the sketches were first published in the book "Drawn Blank" in 1994, which won critical acclaim.


The collection of prints, watercolors and acrylic paintings were shown in Germany in 2007, but the New York exhibition will be the first time the drawings are exhibited in the United States.
Advertisement
The exhibition includes several originals, but also limited edition prints. A portion of proceeds will go towards leukemia, cancer and AIDS research.

It was a museum in Germany that first approached him with the idea of enlarging and adding color to his sketches.

Dylan, who turns 73 on May 24, worked on the paintings for eight months, said Mickey Ross, owner of the Ross Art Group gallery on Madison Avenue in New York.

The same sketch has often been reproduced in different colors, such as the back portrait of a woman wearing a green, pink or blue dress.

The titles are simple, without any explanation.

"It is very important to Bob Dylan. He doesn't dictate what the viewers must take away," said Ross.

Source: AFP
Advertisement
<< Never too Late to Start Endurance Training, Says Study
Emergency Talks on Deadly MERS Virus to be Held by WHO on T... >>