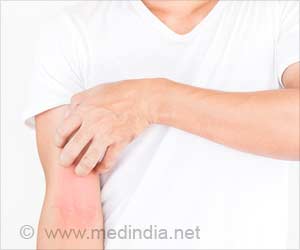 A novel way to stop itch with light in mice has been identified by EMBL researchers. Nature Biomedical Engineering publishes their results on December 2018.

Itch is easily one of the most annoying sensations. For chronic skin diseases like eczema, it's a major symptom. Although it gives temporary relief, scratching only makes things worse because it can cause skin damage, additional inflammation and even more itch.

The specialized nerve cells that sense itch are located in the upper surface of the skin. Linda Nocchi, Paul Heppenstall and colleagues at EMBL Rome developed a light-sensitive chemical that binds only to those cells. The effect of the treatment can last several months. Other types of nerve cells in your skin - which make you feel specific sensations like pain, vibration, cold or heat - are not affected by the light treatment: the skin only stops itching.


The method works well in mice with eczema (AD: atopic dermatitis), and a rare genetic skin disease called amyloidosis (FPLCA: familial primary localized cutaneous amyloidosis), for which there's currently no cure. "For me, the most exciting part of this project was seeing the improvements in the animals' health", says Linda Nocchi, first author of the paper and postdoctoral researcher in the Heppenstall group. "Their skin looked much better after treatment and they scratched less."
Advertisement
"We hope that one day, our method will be able to help humans suffering from a disease like eczema, which causes chronic itching", says Paul Heppenstall, who led the study. It is already known that mice and humans have the same target molecule for itch therapy: a small protein called Interleukin 31 (IL-31). One of the team's next steps will be to test the light therapy in human tissues.

Previously, the Heppenstall group published a method to manage chronic pain with light. "We think that the mechanism we've discovered might be a general method for controlling sensation through the skin", says Heppenstall. "Our goal now is to take these therapies further. We want to collaborate with industry partners to develop therapies for humans, but also for veterinary medicine, as itch is a major problem in dogs as well."

Test Your Knowledge on Itching / Pruritus
Itching, also called pruritus, is a sensory experience that causes an impulse or reflex to scratch ....

Sensory Switches Controlling Infanticide and Parental Behavior Uncovered
The switch between such extreme behaviours in mice is determined by a mixture of pheromones and ......

Simple 6 Ways to Treat Dry, Itchy Skin in Babies
Baby Eczema: Is your baby suffering from dry and itchy skin? Babies have delicate skin, which is ......