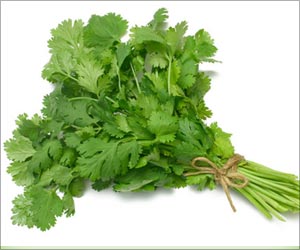 Schauer said that cilantro grows wild in vast amounts in countries that have problems with heavy-metal water pollution. It is readily available and inexpensive.


"When the filter in a water purification pitcher needs to be changed, they could go outside, gather a handful of cilantro or some other plant, and presto, there's a new filter ready to purify the water," the researcher said.
Advertisement
Cilantro's secret may lie in the structure of the outer walls of the microscopic cells that make up the plant. They have an architecture ideal for sorption of heavy metals. Other plants, including cilantro's cousins, parsley and culantro, have similar features and could potentially work as biosorbents, he added.

Schauer said that biosorbents like cilantro could be packed into tea-bag-like packets, reusable water filter cartridges or even tea infuser balls and used to remove heavy metals.

The study was presented at National Meeting and Exposition of the American Chemical Society.

Coriander
Coriander, generally used for garnishing food items across the world has a high nutritive value. ......

Arsenic in Drinking Water may Lead to Lung Damage
Exposure to moderate amount of arsenic in drinking water could impair lung function, a new study ......

Children Ill After Drinking Water in Bihar School
About 50 children were taken ill after drinking water from a handpump at a school in Bihar's ......

New Program Hopes to Restore Drinking Water Systems Following Deliberate Contamination
A team of international researchers has come up with a response program that can rapidly restore ......