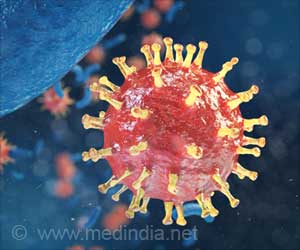 Novel vaccine containing DNA and recombinant proteins developed through 'reverse vaccinology' found to induce antibodies similar to those associated with protection from HIV. This vaccine, which was tested in monkeys was developed by the researchers at the Icahn School of Medicine at Mount Sinai.

Researchers first identified a part of the virus which, when bound to antibodies, results in the destruction of the virus and of virus-infected cells. Then they designed a vaccine that would induce these types of antibodies. This approach to vaccine design is called "reverse vaccinology."

Advertisement
‘New vaccine is found to be safe and effective in inducing adequate levels of desired antibodies in monkeys, suggesting a similar protection to be offered among humans playing a vital role in preventing HIV.’
Read More..

The target identified by the researchers on the virus is called the V1V2 loop of the gp120 envelope protein. In studies of monkeys vaccinated with gp120 DNA and a combination of three novel recombinant proteins carrying the V1V2 region, antibodies were induced that display many different antiviral functions. These antibodies were of the type that had been associated with a reduced rate of HIV infection in previous human clinical trials, according to the study published in Cell Reports.


"Our lab, together with researchers from several institutions in the United States, has been working for more than a decade on a novel approach to developing a vaccine against HIV/AIDS," said lead author Susan Zolla-Pazner, PhD, Professor of Medicine and Microbiology at the Icahn School of Medicine at Mount Sinai. "The vaccine we have developed is safe, in that it contains nothing that is infectious to the individual vaccinated. In the study now being published, we show that this novel vaccine induces the desired antibodies in monkeys, which suggests strongly that similar protective antibodies can be induced in humans and may play an important role in preventing HIV infection."
Advertisement
Showing that a vaccine will induce antibodies in monkeys is important since it suggests that humans will react similarly. The successful production of antibodies in monkeys with the novel vaccine studied in this report indicates that the vaccine should move forward to first-in-human studies to determine if it is as safe, well-tolerated, and immunogenic as it was in monkeys.