New Tool Predicts the amount of Calories Burned While Walking 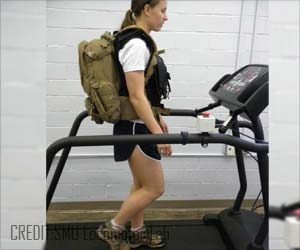 A new accurate quantitative assessment tool discovered predicts the rate at which soldiers burn calories while walking, how fast can they walk while carrying a load, and whether the walk is uphill or downhill or level, reveals a new study.

When military strategists plan a mission, one of many factors is the toll it takes on the Army's foot soldiers. The scientists at Southern Methodist University, Dallas conducted the study.

Advertisement
‘New accurate quantitative assessment tool can also be useful for hikers, mall-walkers, backpackers, and others who are calorie conscious.’

A long march and heavy load drains energy. So military strategists are often concerned with the calories a soldier will burn, and the effect of metabolic stress on their overall physiological status, including body temperature, fuel needs and fatigue.


The method was developed with funding from the U.S. military. It significantly improves on two existing standards currently in use, and relies on just three readily available variables.
Advertisement
"Our new method improves on the accuracy of the two leading standards that have been in use for nearly 50 years," said exercise physiologist Lindsay W. Ludlow, an SMU post-doctoral fellow and lead author on the study. "Our model is fairly simple and improves predictions."

The research is part of a larger load carriage initiative undertaken by the U.S. Army Medical and Materiel Command. The average load carried by light infantry foot soldiers in Afghanistan in April and May 2003 was 132 pounds, according to a U.S. Army Borden Institute report.

"Soldiers carry heavy loads, so quantitative information on the consequences of load is critical for many reasons, from planning a route to evaluating the likelihood of mission success," said SMU biomechanist and physiologist Peter Weyand, @Dr_Weyand.

"The military uses a variety of approaches to model, predict and monitor foot-soldier status and performance, including having soldiers outfitted with wearable devices," Weyand said. "There is a critical need with modern foot soldiers to understand performance from the perspective of how big a load they are carrying."

Weyand is senior author on the research and directs the Locomotor Performance Laboratory in the SMU Simmons School of Education, where subjects for the study were tested.

The researchers call their new method the "Minimum Mechanics Model" to reflect that it requires only three basic and readily available inputs to deliver broad accurate predictions. They reported their findings in "Walking economy is predictably determined by speed, grade and gravitational load" in the Journal of Applied Physiology.

The necessary variables are the walker's speed, the grade or slope of the walking surface, and the total weight of the body plus any load the walker is carrying.

"That's all it takes to accurately predict how much energy a walker burns," Ludlow said.

While the measurement is a critical one for foot soldiers, it's also useful for hikers, backpackers, mall-walkers and others who are calorie conscious and may rely on wearable electronic gadgets to track the calories they burn, she said.

Existing standards now in use rely on the same three variables, but differently, and with less accuracy and breadth.

The new theory is a departure from the prevailing view that the mechanics of walking are too complex to be both simple and accurate.

"Ultimately, we found that three remarkably simple mechanical variables can provide predictive accuracy across a broad range of conditions," Ludlow said. "The accuracy achieved provides strong indirect evidence that the muscular activity determining calorie-burn rates during walking is tightly coupled to the speed, surface inclination and total weight terms in our model."

By using two different sets of research subjects, the researchers independently evaluated their model's ability to accurately predict the amount of energy burned.

"If muscle and gait mechanics were not tightly coupled across speed, grade and load, the level of predictive accuracy we achieved is unlikely," Weyand said.

The two existing equations that have been the working standards for nearly 50 years were necessarily based on just a few subjects and a limited number of data points.

One standard from the American College of Sports Medicine tested only speed and uphill grades, with its first formulation being based on data from only three individuals.

The other standard, commonly referred to as the Pandolf equation is used more frequently by the military and relies heavily on data from six soldiers combined with earlier experimental results.

In contrast, the generalized equation from SMU was derived from what is believed to be the largest database available for human walking metabolism.

"The leading standardized equations included only level and uphill inclinations," Weyand said. "We felt it was important to also provide downhill capabilities since soldiers in the field will encounter negative inclines as frequently as positive ones."

Subjects fast prior to measuring their resting metabolic rates

Another key element of the SMU lab's Minimum Mechanics Model is the quantitative treatment of resting metabolic rate.

In separate test sessions, the subjects walked on the treadmill for dozens of trials lasting five minutes each, wearing a mouthpiece and nose clip. In the last two minutes of each trial, the researchers measured steady-state rates of oxygen uptake to determine the rate at which each subject was burning energy.

As expected, walking metabolic rates increased in direct proportion to the increase in load, and largely in accordance with support force requirements across both speed and grade, said Weyand and Ludlow.

Source: Eurekalert
Advertisement
<< Heart Surgery Benefits Infants With Trisomy 13 or 18
Living Near the Woods can Have a Positive Impact on the Brai... >>

More News on:
Why Do We Eat - Nutrition Facts Diet Lifestyle and Heart Disease Lifestyle Modification: No Big Deal! Body Types and Befitting Workouts Walking for Fitness and Weight Loss Walking As An Exercise How to Keep Christmas Calories under Control The Spark Solution Diet Who Else Wants to Know How Walking Helps Heart and Brain?

Menu Labels Displaying Amount of Exercise Needed to Burn Calories Benefit Consumers
A new study records great benefits from displaying on the menu the minutes of exercise such as ......

Scientists Identify Protein That Stimulates Brown Fat to Burn Calories
A protein, which regulates the activation of brown fat in both the brain and the body's tissues has ...

Brown Fat may Help Burn Calories
In rodents and newborn humans, brown fat is a specialized tissue that burns calories to generate ......

Who Else Wants to Know How Walking Helps Heart and Brain?
Walking early morning would improve your health as it helps heart and brain to function properly. Fi...