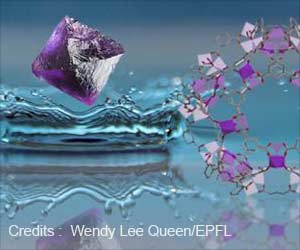 According to the World Health Organization almost 1 billion people do not have access to clean drinking water, and that number is expected to increase with climate change.

Seventy percent of our body is water. It is a vital need to live healthy. Learn how drinking water regularly keeps the body in proper function.
Advertisement
‘Heavy metals such as lead and mercury can be removed from water using metal organic frameworks (MOFs).’

Meanwhile, our endlessly rising energy needs and use of heavy metals in industrial processes have maximized our exposure to toxic materials in water.


Current commercial methods to remove heavy metals including lead from municipal drinking water tend to be costly and energy-consuming, without being sufficiently efficient.

Typhoid and Paratyphoid Enteric Fevers are caused by bacteria called Salmonella typhi. Causes, symptoms, diagnosis and treatment of Typhoid and Paratyphoid Enteric Fevers are discussed.
Advertisement
Less conventional approaches might be more efficient, but are single-use, difficult to regenerate, or produce significant toxic waste as a side-product.

Now, the lab of Professor Wendy Lee Queen at EPFL, with colleagues at the University of California Berkeley and Lawrence Berkeley National Laboratory have found a solution using metal organic frameworks (MOFs), which are materials made up of metal nodes interlinked by organic chemical 'struts'.

The scientists treated a MOF, known as Fe-BTC, with dopamine, which polymerized to polydopamine (PDA) pinning the polymer inside the MOF. The final composite, named Fe-BTC/PDA, can quickly and selectively remove high amounts of heavy metals like lead and mercury from real-world water samples.

In fact, it can remove over 1.6 times its own weight of mercury and 0.4 times of its weight of lead.

Fe-BTC/PDA was then tested in solutions as toxic as some of the worst water samples found in Flint, Michigan.

The tests showed that the MOF can, in a matter of seconds, reduce lead concentrations to 2 parts per billion, a level that the U.S. Environmental Protection Agency and World Health Organization deem drinkable.

The scientists also removed lead from various real-world water samples obtained from the Rhone River, the Mediterranean Sea, and a wastewater treatment plant in Switzerland. They also showed how the material could be regenerated easily.

There are multiple sources of exposure to toxic heavy metals. For example, lead is used in paint, ceramic glazes, jewelry, toys, and pipes.

Considering this, the approach with the new MOF shows much promise for solving current limitations of water-cleaning systems.

The authors of the study are now testing other new specially designed MOFs to remove other types of trace contaminants in water and air.

Drink Less to Avoid Hangover, Eating and Drinking Water Does Not Help

Researchers had been working with Canadian and Dutch students on this issue and found that the more you drink, the more likely you are to get a hangover.
Advertisement
<< Compassion was the Key to Neanderthals Survival
Tumor Microenvironment Influences The Growth of Breast Cance... >>

Australia's levels of water fluoridation is safe for consumption and has no links with causing cancer, lowering IQ and other health problems.

Daily Calorie Requirements Accident and Trauma Care How to Reduce School Bag Weight - Simple Tips Drug Interaction Checker Drug Side Effects Calculator Post-Nasal Drip Find a Hospital Blood - Sugar Chart Pregnancy Confirmation Calculator Find a Doctor
This site uses cookies to deliver our services.By using our site, you acknowledge that you have read and understand our Cookie Policy, Privacy Policy, and our Terms of Use  Ok, Got it. Close
×