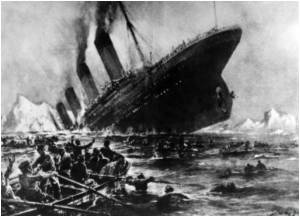 Australian tycoon Clive Palmer to build a perfect replica of the Titanic.

More than a century after the original, supposedly unsinkable ocean liner hit an iceberg and went down in the North Atlantic, Palmer thinks the time has come to complete the unfinished journey to New York.

"The Titanic was the ship of dreams. Titanic II is the ship where dreams will come true," Palmer said in New York at the project's official launch.


Featuring the same rigid divisions as in 1912 between first, second and third class, passengers will eat either in an ornate dining room or at a long common table. "There'll be no mingling" between classes, Palmer said.
Advertisement
Passengers in the luxury section will enjoy the identical grand staircase and reproductions of the original Titanic's Turkish bath and swimming pool.

Rebuffing public skepticism about the project, Palmer said a contract could be signed with China's CSC Jinling Shipyard within days, with construction starting by the end of this year and the launch in 2016. He wouldn't say what it will all cost.

"Certain people, certain individuals spend too much time in the pub or the bar saying, 'Oh that will never happen,'" he said. Palmer refused to give the estimated cost, saying bluntly: "I'm funding this myself because I want to spend the money I've got before I die."

A larger than life character who has made a fortune in mining, Palmer said he was unfazed by the seeming temptation of fate in giving one of the unluckiest shipping projects in history a second chance. "I'm not too superstitious," he said.

Titanic II will closely resemble the original, although with important modifications, including a slightly wider hull and an extra layer of decking.

Passengers will be provided with period costumes appropriate to their class of ticket, Palmer said, joking that he will be in third class. "That's where the fun's going to be."

One modification that Palmer underlined is a vast improvement in the lifeboats, which were insufficient on the original ship, contributing to the loss of more than 1,500 people when it sank in icy waters.

Palmer said this time the ship would exceed regulatory requirements with top-of-the-range lifeboats that are "very safe."

"You could go round the world in them if you wanted," he said.

But he wouldn't fall into the trap of echoing the "unsinkable" claim.

"It would be very cavalier to say anything like that. I think people have said that in the past," Palmer deadpanned.

Titanic Dead Remembered
At sea and on land wreaths were cast and to remember the 1500 people who died when the Titanic sunk ...

Global Launch Of Titanic II Delayed By Storm Sandy
A New York gala to unveil plans for the vessel would be delayed out of respect for the victims of ....