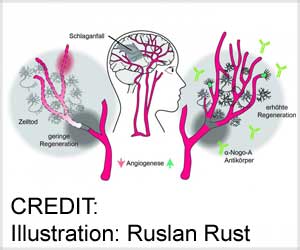 Antibodies that inhibit the signaling molecule Nogo-A can help repair blood vessels in the affected brain regions and also promote the regaining of motor functions, following a stroke, said researchers at the University of Zurich have shown in a mouse model. The study opens up new avenues for treatment.

Two thirds of those affected die or remain in permanent need of care due to the brain's limited capacity to regenerate damaged tissue and neural circuits. At present, despite intensive research efforts only few medical therapy options are available that reduce the serious consequences after cerebral stroke.

Stroke can cause permanent disability and it is important to recognize its early warning signs to stop its progress. Early warning signs of stroke include sudden weakness of facial muscles.
Advertisement
‘Each year, around 16,000 people in Switzerland and 15 million people worldwide suffer a stroke. ’


A promising new approach to promote the recovery of physiological functions aims to repair the system of blood vessels in the affected brain regions. The system supplies the injured tissue with oxygen and key nutrients. In people who have suffered a stroke, this repair process is inhibited by a number of mechanisms. A few years ago, the research group of UZH Professor Martin Schwab used a mouse model to, among other things, show that the signaling molecule Nogo-A not only reduces the growth of nerve fibers, but also regulates blood vessel sprouting in the brain and could thus also inhibit their repair.

Stroke is the third leading cause of death world over. Besides, it also disables the affected people, making them completely dependent on caregivers for their daily needs. Lifestyle greatly affects the chances of developing a stroke. Thus, the incidence of stroke can be brought down to a great extent by leading a healthy lifestyle. Here is a quiz that tests if you know enough about this disabling
Advertisement
Motor function improvement thanks to vascular growth

In a new study with mice, the researchers genetically deactivated the Nogo-A molecule or one of its corresponding receptors S1PR2. The blood vessels in these mice showed improved regenerative capacity, and they recovered affected motor skills better than those of the mice in the control group. These findings were reproduced in a therapeutic approach using anti-Nogo-A antibodies in mice following a stroke, which too led to the re-formation of a robust and functional vascular network around the affected brain regions. "The nervous system of the treated mice showed better recovery and their motor functions were less affected, which we ascribe to vascular regeneration," says first author and UZH neuroscientist Ruslan Rust.

Previous experimental efforts to enhance vessel growth have almost exclusively focused on vascular growth factor supplementation, an approach that has been shown to be clinically unviable due to adverse side effects such as increased risk of hemorrhage. "Our findings provide a promising alternative approach to treating stroke patients," says Rust, "not least since anti-Nogo-A antibodies are already being used in clinical testing for spinal cord injuries."

Strokes occur when blood flow to an area of the brain is cut off. It is imperative to detect the signs of a stroke and rush the patient to the hospital at once.
Advertisement
<< Dual Effects of New Osteoporosis Therapy on Bone Tissue
Novel 3D Printing may Help Stop Hair Loss, Promote Growth >>

Stroke Risk Calculator checks if you have hypertension, diabetes and heart failure and predicts the risk of stroke (cerebrovascular accident) in next 10 years.

Stress and the Gender Divide
News Archive
News Resource
Advertisement
News Category
Can Dogs (as Pets) Help Reduce the Risk of Inflammatory Bowel Diseases? Playing Video Games may be Beneficial for LGBTQ+ Youth Monkeypox Doesn't Spread Easily by Air Like COVID, Says US CDC Treating Monkeypox With Antiviral Drugs Might be Effective Corneal Cells Help the Eyes to Protect Against Infection
More News
Sign up for Wellness Consult a Doctor Sign up for Selfcare