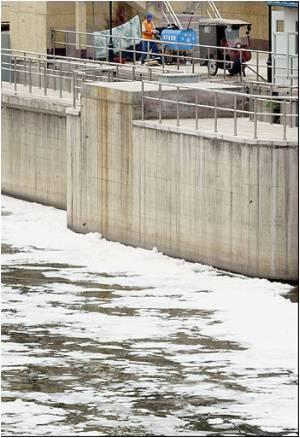 Engineers have developed a new technology that produces electricity directly from wastewater. This new technology opens the door to a future in which waste treatment plants not only will power themselves, but will sell excess electricity.

Researchers say this could eventually change the way that wastewater is treated all over the world, replacing the widely used "activated sludge" process that has been in use for almost a century.

The new approach would produce significant amounts of electricity while effectively cleaning the wastewater.


"If this technology works on a commercial scale the way we believe it will, the treatment of wastewater could be a huge energy producer, not a huge energy cost," said Hong Liu, an associate professor in the OSU Department of Biological and Ecological Engineering.

'smart' Windows That Generate Electricity Are Around the Corner

A new transparent solar cell has been created by UCLA researchers.
Advertisement
"This could have an impact around the world, save a great deal of money, provide better water treatment and promote energy sustainability," Liu said.

Experts estimate that about 3 percent of the electrical energy consumed in the United States and other developed countries is used to treat wastewater, and a majority of that electricity is produced by fossil fuels that contribute to global warming.

But the biodegradable characteristics of wastewater, if tapped to their full potential, could theoretically provide many times the energy that is now being used to process them, with no additional greenhouse emissions.

The system also works better than an alternative approach to creating electricity from wastewater, based on anaerobic digestion that produces methane.

It treats the wastewater more effectively, and doesn't have any of the environmental drawbacks of that technology, such as production of unwanted hydrogen sulphide or possible release of methane, a potent greenhouse gas.

The OSU system has now been proven at a substantial scale in the laboratory, Liu said, and the next step would be a pilot study.

A good candidate, she said, might initially be a food processing plant, which is a contained system that produces a steady supply of certain types of wastewater that would provide significant amounts of electricity.

Once advances are made to reduce high initial costs, researchers estimate that the capital construction costs of this new technology should be comparable to that of the activated sludge systems now in widespread use today - and even less expensive when future sales of excess electricity are factored in.

This technology cleans sewage by a very different approach than the aerobic bacteria used in the past. Bacteria oxidize the organic matter and, in the process, produce electrons that run from the anode to the cathode within the fuel cell, creating an electrical current.

Almost any type of organic waste material can be used to produce electricity - not only wastewater, but also grass straw, animal waste, and by-products from such operations as the wine, beer or dairy industries.

The study was recently published in Energy and Environmental Science, a professional journal.

Sanatogen Sinopril (2mg) (Lacidipine) Diaphragmatic Hernia Turmeric Powder - Health Benefits, Uses & Side Effects Calculate Ideal Weight for Infants Color Blindness Calculator The Essence of Yoga Accident and Trauma Care How to Reduce School Bag Weight - Simple Tips Blood Pressure Calculator
This site uses cookies to deliver our services. By using our site, you acknowledge that you have read and understand our Cookie Policy, Privacy Policy, and our Terms of Use