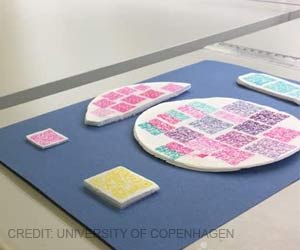 A new method for the production of medicine has been developed. The medical drugs are printed in QR coded patterns onto an edible material that aid in personalizing medicine.

For the last 100 years, researchers have constantly pushed the boundaries for our knowledge about medicine and how different bodies can respond differently to it.

However, the methods for the production of medicine have not yet moved itself away from mass production. Many who have a given illness get the same product with equal amount of an active compound. This production might soon be in the past.


In a new study, researchers from the University of Copenhagen together with colleagues from Åbo Akademi University in Finland have developed a new method for producing medicine. They produce a white edible material. Here, they print a QR code consisting of a medical drug.
Advertisement
"This technology is promising, because the medical drug can be dosed exactly the way you want it to. This gives an opportunity to tailor the medication according to the patient getting it," says Natalja Genina, Assistant Professor at Department of Pharmacy.

The shape of a QR code also enables storage of data in the "pill" itself.

"Simply doing a quick scan, you can get all the information about the pharmaceutical product. In that sense it can potentially reduce cases of wrong medication and fake medicine," says Natalja Genina.

The researchers hope that in the future a regular printer will be able to apply the medical drug in the pattern of a QR code, while the edible material will have to be produced in advance to allow on-demand production of medical drug near end-users.

"If we are successful with applying this production method to relatively simple printers, then it can enable the innovative production of personalized medicine and rethinking of the whole supply chain," says professor Jukka Rantanen from Department of Pharmacy.

The researchers are now working to refine the methods for this medical production.

Source: Eurekalert
Advertisement
<< Reason Behind the Health Effects of Stress Identified
Scientists Identify Cause of AEC Syndrome, a Severe Genetic ... >>

Telemedicine
Telemedicine refers to the use of information and communication technology to provide health care .....

Laymans Guide to Understanding Medical Specialists
Some doctors are mainly involved in diagnosing diseases and the majority of them work inside a ......