New Technique to Detect Cholera Could Save Thousands 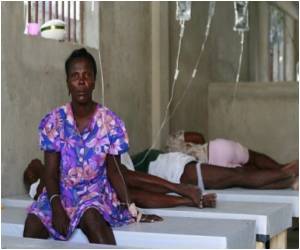 Scientists at the University of Central Florida have developed a a new tool to fight cholera, a disease that has claimed thousands of lives in Haiti since the devastating earthquake last year, a mixture of sugar.

The technique would allow relief workers to test water sources that could be contaminated with the cholera toxin.


The technique likely would be less expensive than those currently available, and it would provide results more quickly, enabling workers to restrict access to contaminated sources and limit the spread of the disease.

Interactive section of Medindia gives details regarding waterborne disease
Advertisement
"It's really quite amazing," said UCF assistant professor J. Manuel Perez, the lead researcher on the project. "It means we have a quicker diagnostic tool using a simple and relatively cheap sugar-nanoparticle combination."

Early studies also show that the technique could someday be used to treat someone infected with cholera, which is caused by poor sanitation and dirty water, and potentially other diseases, Perez said.

More studies are needed to prove the adaptability of the technique, but its impact could be huge. In countries with poor sanitation, outbreaks caused by drinking contaminated water often prove fatal. Deadly toxins also can result from bioterrorism or food contamination.

There are an estimated 3 million to 5 million cholera cases, and 100,000 to 120,000 deaths, worldwide each year, according to the World Health Organization. A cholera outbreak has killed more than 3,000 people in Haiti since the earthquake, and WHO warned earlier in January that the outbreak has not yet reached its peak.

The response to an appeal to counter the deadly cholera epidemic in Haiti has been blasted as shameful after the world body received only a quarter of the funding it needs.
Advertisement
News A-Z
A B C D E F G H I J K L M N O P Q R S T U V W X Y Z
What's New on Medindia

Accident and Trauma Care Sinopril (2mg) (Lacidipine) A-Z Drug Brands in India Blood - Sugar Chart Post-Nasal Drip Hearing Loss Calculator Color Blindness Calculator Find a Hospital Sanatogen Diaphragmatic Hernia
This site uses cookies to deliver our services. By using our site, you acknowledge that you have read and understand our Cookie Policy, Privacy Policy, and our Terms of Use