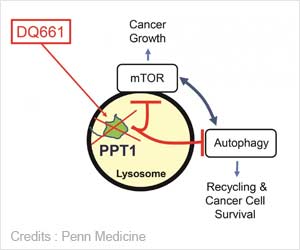 Opening up a new pathway to fight cancer, researchers at the University of Pennsylvania have found a way to target an enzyme that is crucial to tumor growth.

The development of the drug that can successfully inhibit tumor growth of cancers such as melanoma as well as pancreatic and colorectal cancer in mice is possible. The journal Cancer Discovery published the findings online this month.

Advertisement
‘A new approach to fight cancer such as melanoma, pancreatic and colorectal cancer blocks the key growth enzyme called PPT1 as well as the process that causes resistance to current treatments. The drug being developed for this purpose is called DQ661.’

The target is an enzyme called PPT1, which controls both the mechanistic target of rapamycin (mTOR), a major regulator of growth in cancer cells, as well as a process called autophagy, a built-in resistance mechanism which allows cells to survive when under attack by breaking down unneeded parts and recycling them to stay alive.


Numerous drugs that target mTOR are approved by for cancer patients by the U.S. Food and Drug Administration, but targeting mTOR with these currently available inhibitors turns on autophagy, thus making the tumor resistant.
Advertisement
"What we learned in this study is that mTOR and autophagy aren't opposed to each other as previously thought. They're actually complementary, because autophagy provides the nutrients that allow mTOR to direct growth, while mTOR shuts off autophagy when the nutrients aren't needed," said co-senior author Ravi K. Amaravadi, MD, an associate professor of Hematology Oncology in the Perelman School of Medicine at the University of Pennsylvania and a member of Penn's Abramson Cancer Center.

That yin and yang relationship takes place in a part of the cell called the lysosome. Previously, it has taken two drugs to stop both processes, but by focusing on drugs that hone in on the lysosome more efficiently, researchers have found one drug that can block both.

"We know that autophagy is an important mechanism for cancer resistance, but there are very few ways to block it. This is the first targeted approach to inhibiting the lysosome in order to block autophagy," Amaravadi said.

The drug that makes it work is called DQ661, and it specifically targets the PPT1 enzyme that controls both mTOR and autophagy. This study suggests drugs that target PPT1 in this way could one day improve outcomes for cancer patients. DQ661 is a dimeric form of the antimalarial drug quinacrine - meaning it has two molecules of quinacrine bound together with a special linker.

"It turns out that both what is linking them and how they are linked are crucial to why this works," said the study's co-senior author Jeffrey D. Winkler, the Merriam Professor of Chemistry in the School of Arts and Sciences at the University of Pennsylvania.

"In this study, we were able to tailor the chemistry so that the drug specifically targets PPT1 in the lysosome."

The lead authors of the study were Vito W. Rebecca, PhD, a postdoctoral researcher in Amaravadi's lab, Michael C. Nicastri, a graduate student in Winkler's lab, and Noel McLaughlin, PhD, who was a postdoctoral researcher in Winkler's lab at the time of the research. Winkler says the ability to work across multiple disciplines is what led to the discovery.

"As (Amaravadi) and his team tried to solve the autophagy problem, they came to us for help in developing a better form of quinacrine, which is what we have in DQ661," Winkler said.

While the approach has clear clinical benefits, researchers still need to develop these compounds into drugs that are suitable for human patients, which will be the focus of their efforts moving forward.

Benefits of a Vegan Diet for Fighting Cancer
A vegan diet consisting of fruits, vegetables and other plant-based food sources has been shown to ....

Blood-vessel Gene Could Fight Cancer, Cardiovascular Diseases
Researchers from the University of Leeds have discovered, Piezo1, a gene which creates blood vessel ...