RAGE or receptor for advanced glycation end products may contribute to the inflammation and damage that amyloid causes to the nerve cells of the brain, say researchers. Amyloid and the way it gets there could be targets for a new vaccine. 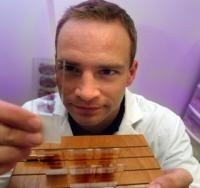 In Alzheimer's, the amyloid protein can accumulate in the brain instead of being eliminated by the body's natural defenses, nestling between the neurons and forming impassable plaques.

Amyloid and the way it gets there could be targets for a new vaccine.

"RAGE, or receptor for advanced glycation endproducts, proteins bind to amyloid and transport it into the brain," said Scott Webster, a fifth-year graduate student who is studying the disease in the lab of Dr. Alvin Terry, Professor of Pharmacology and Toxicology. Research has shown that RAGE may also contribute to the inflammation and damage that amyloid causes to the brain's nerve cells.

Webster is researching a vaccine that targets RAGE and amyloid by using the body's own immune system to protect against their over-production and eventual build-up. His work has earned him the 2011 Darrell W. Brann Scholarship in Neuroscience, a $1,000 award honoring an outstanding graduate student on campus working in neuroscience.

"Unfortunately, all of the vaccines for Alzheimer's that have been through clinical trials have failed," he said. "Part of the reason why could be that they're just not comprehensive enough. Most only target amyloid. Our hope is that by taking a more encompassing approach, we will be more effective. So far, that's exactly what we're seeing in our experiments."

Other vaccines also have multiple side effects, including swelling of the brain. Webster hopes that targeting the RAGE protein and changing how the vaccine is administered will minimize inflammatory side effects.

Another benefit is that the vaccine can be administered orally, since it does not require an adjuvant, which is added to vaccines to enhance the immune response. The digestive tract is one of the body's largest repositories of human flora, microorganisms that are key to the immune system.

"That's a relatively new idea," Webster said. "By using the immune system that's endogenous to our gut, we can skew the body's response away from the inflammatory and toward a more robust antibody response, bypassing some of the side effects."

Early results have shown improved cognition and memory in animal models of Alzheimer's, something Webster considers a sort of personal crusade.

"I have watched a close family friend suffer from the disease and saw how devastating it was," he said. "The family is caring for this person and yet the person doesn't even remember who his own family is. It's a heartbreaking process to watch."

Even with promising results, he cautioned of unknowns about the potential vaccine.

"We need to move on to larger animal studies. We have a lot we still don't know about the vaccine itself. For example, we know that amyloid and RAGE bind together, but we don't know why the binding creates such a stable complex. We have these end points, but we still don't know some of the basic science that needs to be known so that we can push ahead."

Alzheimer's disease (AD) is the most common form of dementia. Participate in this quiz to find out how much you know about this debilitating ...

A new study sheds light on why people with Alzheimer's disease often lose their sense of smell early on in the course of the disease. An Alzheimer's protein kills nerve cells in the nose.