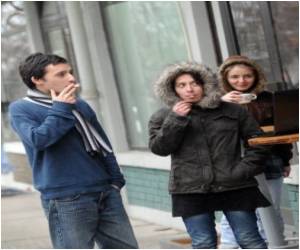 Two new studies have shed more light on how smoking may damage fertility, and give further weight to advice that mothers and fathers-to-be should stop smoking before attempting to conceive. The research is published online in Europe's leading reproductive medicine journal Human Reproduction.

In the first study, researchers found that a mother's smoking during early pregnancy dramatically reduces the numbers of germ cells (the cells that form eggs in females and sperm in males) and somatic cells (the cells that form every other part of the body) in the developing foetus. They believe that this may have an adverse effect on the fertility of the baby in later life.

In the second study, researchers looked at specific proteins called protamines in the sperm of men who smoked and compared them with the protamines in non-smokers. Protamines play an important role in the development of sperm - they are necessary for the process that results in the formation of chromosomes during cell division - and, therefore, have an effect on subsequent male fertility.


For the first study, Claus Yding Andersen, Professor of Human Reproductive Physiology at the University Hospital of Copenhagen (Denmark), and his colleagues looked at 24 embryonic testes obtained after women had undergone legal termination between 37-68 days after conception. They also took blood and urine samples and questioned the women about their lifestyle during pregnancy, including smoking and drinking habits.
Advertisement
They found that the number of germ cells was more than halved (reduced by 55%) in the testes of embryos from mothers who smoked compared with those from the non-smoking mothers. The number of somatic cells was also reduced by more than a third (37%). The effect was dose dependent, with a greater reduction in germ and somatic cells being seen in embryos from the mothers who smoked the most. This remained the same, even after adjusting for coffee and alcohol consumption.

When these results were added to their earlier work that looked at the effect of smoking on 28 female embryos, the researchers found that, overall, germ cells in the ovaries and testes of embryos exposed to smoking were reduced significantly by 41% compared with the number of germ cells in non-exposed embryos. The results also showed that germ cells were more susceptible to damage caused by smoking than somatic cells.

Prof Andersen said: "As the germ cells in embryos eventually develop to form sperm in males and eggs in females, it is possible that the negative effect on the numbers of germ cells caused by maternal smoking during pregnancy may influence the future fertility of offspring. In addition, the reduction in the number of somatic cells also has the potential to affect future fertility, as somatic cells in the testes support the development of germ cells to form functional sperm. If the somatic cell number is reduced, fewer functional sperm will be produced.

"These findings may provide one potential cause of the reduced fertility observed in recent years. Although the prevalence of smoking during pregnancy has declined in the last decade in developed countries, one in eight mothers continue to smoke throughout their pregnancy, and in Denmark the prevalence of smoking actually increased to 43% in 2005 among women younger than 20 at the time of delivery. This tendency is alarming, and when you take the results from this study in combination with the other known negative effects of cigarette smoke during pregnancy, it further emphasises that pregnant mothers should refrain from smoking."

The first trimester is the crucial time when the sexual organs in the developing embryo are differentiating to form either testes or ovaries. "This process is very delicately regulated, with a number of hormones fluctuating. If something goes wrong at this point, just six to eight weeks after conception, it may have an impact on the function of the gonads later in life," said Prof Andersen. "Our results show that the gonads are susceptible to factors, such as cigarette smoke, just at this critical time when they start to differentiate."

The authors warn that their study does not clarify whether the reduction in germ and somatic cell numbers is permanent or reflects a growth delay that might be compensated for later on. Prof Andersen said: "We would expect adverse effects to be more pronounced if the mother continues smoking throughout pregnancy, but we have only studied gonads from the first trimester and can only guess whether this effect actually will occur. So the effect on future fertility is still unknown. However, this study does indicate that smoking during pregnancy may have an adverse effect on the future reproductive ability of offspring, since both the number of germ cells and somatic cells are dramatically reduced and these are the foundations of future fertility."

In the second study, researchers led by Professor Mohamed Hammadeh, head of the assisted reproductive laboratory in the Department of Obstetrics and Gynaecology at the University of the Saarland, (Homburg Saar, Germany), looked at the levels of two protamines, 1 and 2, in the sperm of 53 heavy smokers (more than 20 a day) and 63 non-smokers.

P1 and P2 are necessary for proper chromatin condensation. This is the process whereby chromatin (the combination of DNA and proteins that make up chromosomes) condenses and packages up DNA into chromosomes that can fit inside cells. Poor chromatin packaging adversely affects sperm and is associated with a number of fertility problems such as lower chances of fertilisation after intercourse, poor fertilisation after IVF and ICSI (intracytoplasmic sperm injection), and a higher incidence of miscarriages. This is the first study to investigate the effect of smoking on protamines.

Prof Hammadeh and his colleagues found that P2 concentrations were 14% lower in the sperm of smokers compared with non-smokers. "The concentration of P2 from smokers was 334.78 ng in every million sperm, compared with P2 concentrations of 388.8 ng per million sperm in non-smokers," said Prof Hammadeh. "This means that sperm from smokers suffer from protamine deficiency, probably caused by the cigarette smoke, and this could be a reason for incomplete or poor chromatin packaging in sperm, leading to infertility."

The researchers found that the ratio of P1 to P2 was altered in smokers. "In normal, fertile men, the ratio of P1 to P2 is almost equal at 1:1. Any increase or decrease in this ratio represents some kind of infertility. In this study the ratio was significantly higher in smokers than in non-smokers, with higher levels of P1 than of P2," said Prof Hammadeh.

The study also showed that levels of oxidative stress were higher in smokers than in non-smokers. Oxidative stress is an imbalance between chemically reactive molecules containing oxygen, other, unstable and highly reactive atoms called free radicals (collectively known as "reactive oxygen species"), and anti-oxidant compounds. It can cause damage to proteins, lipids and DNA. "Oxidative stress is known to cause damage to sperm DNA in a number of ways," said Prof Hammadeh. "These results suggest that induced oxidative stress by cigarette smoking may have a significant inverse effect on chromatin condensation by disrupting P2."

He concluded: "Given the potential adverse effects of smoking on fertility, cancer and so on, physicians should advise infertile patients who smoke cigarettes to quit smoking. We are carrying out further research into the levels of P1 and P2 in order to find out the effect of smoking on the silencing or changing of the P2 gene in an attempt to clarify the potential mechanism behind this effect."

Journey of the Male Sperm - Animation
Interactive section of Medindia explains the journey of the sperm from testis to the outside ......

Buerger´s Disease
Buerger's disease or thromboangiitis obliterans is a condition that reduces blood supply to the hand...

PLAC Test for Cardiovascular Disease
Ensure your heart health by getting a PLAC test. Prevent heart attack and stroke by detecting your r...