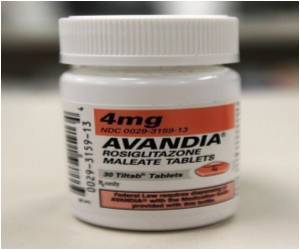 A new study has added to mounting evidence that rosiglitazone, a drug used to treat type 2 diabetes, is associated with an increased risk of major heart problems.

It finds that rosiglitazone is associated with significantly higher odds of congestive heart failure, heart attack and death compared with a similar drug (pioglitazone).

Rosiglitazone, a drug used to treat type 2 diabetes has been banned by the European Medicines Agency (EMA). The FDA has issued a warning regarding the use of this drug due to an associated increase in heart attacks.
Advertisement

Rosiglitazone and pioglitazone belong to a class of drugs called thiazolidinediones that help to control blood sugar levels in patients with type 2 diabetes. Both drugs are known to increase the risk of heart failure, but it is unclear whether there are clinically important differences in their cardiac safety.


In 2010, the European Medicines Agency suspended the use of rosiglitazone in Europe, but in the United States it is still available on a restricted basis.

Learn more about Type 2 Diabetes, a disease that is taking the world by storm!
Advertisement
So a team of researchers in the UK and the US set out to compare the cardiovascular effects of the two drugs among patients with type 2 diabetes.

Compared with pioglitazone, rosiglitazone was associated with a modest but statistically significant increased risk of heart attack (16%), congestive heart failure (23%), and mortality (14%).

In certain groups of patients with type 2 diabetes, this may lead to 170 excess heart attacks, 649 excess cases of heart failure, and 431 excess deaths for every 100,000 patients who receive rosiglitazone rather than pioglitazone.

Further adjusting the data to minimise bias, did not change the results significantly, suggesting that this is unlikely to be a chance finding, say the authors.

"Our findings have important implications," they write. "Rosiglitazone is still available on a restricted basis in the United States and Canada. However, for patients who need thiazolidinedione treatment, continued use of rosiglitazone may lead to excess heart attacks, heart failure and mortality, compared with pioglitazone."

Given that there are about 3.8 million prescriptions for rosiglitazone dispensed annually in the United States, "the effect on public health may be considerable," they warn.

They also emphasise that both rosiglitazone and pioglitazone have been linked with other important safety concerns, and say that further studies are needed.

In an accompanying editorial, Victor Montori and Nilay Shah from the Mayo Clinic in the US argue that the rosiglitazone story "says much about how healthcare has become less about promoting patients' interests, alleviating illness, promoting function and independence, and curing disease, and much more about promoting other interests, including those of the drug industry."

They believe that regulators, prescribers, and patients all have a role in promoting patient safety and they urge patients to become engaged in decisions about their diabetes treatment.

The risk factors that work behind the scene before a heart attack are familiar to many. But do you realize the extent to which your lifestyle choices are putting your life at risk? Can you identify a heart attack when it occurs? Take our quiz and find out.
Advertisement
<< More deaths caused by Medications than cancer or heart attac...
Cholera Could Affect 800,000 Haitians This Year: US Study >>

Hearing Loss Calculator Selfie Addiction Calculator How to Reduce School Bag Weight - Simple Tips Find a Doctor Post-Nasal Drip The Essence of Yoga Blood Donation - Recipients Diaphragmatic Hernia Vent Forte (Theophylline) A-Z Drug Brands in India
This site uses cookies to deliver our services. By using our site, you acknowledge that you have read and understand our Cookie Policy, Privacy Policy, and our Terms of Use