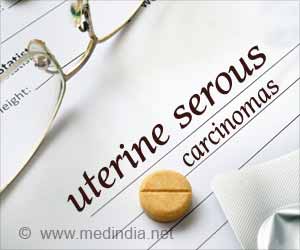 Paclitaxel plus carboplatin (PC) combination treatment was considered a standard of care for women with stage I-IV, recurrent carcinosarcoma of the uterus or ovary, revealed results from the phase III NRG Oncology clinical trial GOG 0261.

The study concludes that among uterine cancer patients treatment with PC was not inferior to paclitaxel plus ifosfamide (PI) based on the primary objective overall survival (OS), and PC was associated with longer progression-free survival (PFS) outcomes when compared with PI. These results were recently presented at the American Society for Clinical Oncology (ASCO) Annual Meeting and was awarded a "Best of ASCO" designation.

"While they are rare, gynecologic carinosarcomas are extremely aggressive and there has been a great deal of debate surrounding what the ideal or optimal treatment regimen would be for the women who have these malignancies," stated Matthew A. Powell, MD, of the Washington University School of Medicine and the lead author of the NRG-GOG 0261 abstract. "Previous Phase 2 research suggested that paclitaxel combined with carboplatin may improve outcomes for this patient population in terms of safety and convenience of treatment, so we tested this against a treatment regimen that included paclitaxel and ifosfamide."


Results from the NRG GOG 0261 clinical trial including 449 eligible patients in the primary uterine carcinosarcoma cohort estimate median overall survival at 37 months for those who received PC compared to 29 months for the PI treatment arm (HR = 0.87; 90% CI = 0.70 to 1.075; p < 0.01 for NI, p > 0.1 for superiority (S). Additionally, median PFS was 16 months for women who received PC and 12 months for women who received PI (HR = 0.73; p = < 0.01 for NI, p < 0.01 for S). There was an increased toxicity for the PC treatment which was mostly hematologic, but confusion and genitourinary hemorrhage were significantly worse with PI (Toxicity grade 1/2/3/4/5: PC 1/8/40/48/2%; PI 1/32/39/25/1%). During treatment, both groups experienced similar decline in QOL and increased neurotoxicity symptoms. There was a similar trend in results noted for the women who participated in the smaller, secondary cohort of patients with ovarian carcinosarcoma with30 month median OS on the PC arm versus 25 months on the PI arm and 15 months median PFS for the PC arm and 10 months for the PI arm.

"The hope is to continue to improve survival and quality of life outcomes for women who experience this rare malignancy," added Dr. Powell.

Uterine Cancer
Uterine Cancer or Cancer of the Uterus (or Endometrial Cancer) refer to cancers affecting the ......

Paclitaxel
This medication is a chemotherapy agent, prescribed for ovarian and breast ......

Carboplatin
This medication is prescribed for the treatment of ovarian cancer. It contains platinum; stops ......