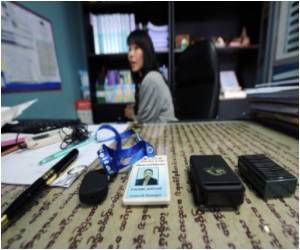 Amnuaiporn Maneewan, a private Thai detective has invented a James Bond-inspired gadget called "mia noi" or "little wife" include tiny cameras and recording equipment hidden in pens, car keys, buttonholes and even calculators, in order to capture the unfaithful spouses in action. "Little wife" act as a spying device to detect cheating spouses. "The only man you can trust is a dead one", says Amnuaiporn. With her James Bond-inspired gadgets including spy cameras and tapping devices, Amnuaiporn specialises in digging up evidence to expose cheating spouses for a law firm in Bangkok.

The 42-year-old has become a master at tailing the unfaithful, catching them in compromising situations with the use of tiny cameras and recording equipment hidden in pens, car keys, buttonholes and even calculators.

Her work has made her a minor celebrity in Thailand, where having a "mia noi" or "little wife" on the side of a marriage is seen almost as a right by some.


This "mistress detective" said there are more and more extra-curricular affairs in the country.

"It's just increasing the whole time; it's not slowing down at all. Now, they don't just have one mistress, they have two or three mistresses," Amnuaiporn said.

Have you ever tested your happiness level? Test your happiness and find out how happy you are with your life.
Advertisement
"It's like a fashion. It's normal. No man leaves the house without a mistress."

Unsurprisingly then, business has never been better.

Three or four new clients, mostly women between the ages of 20 and 60, contact her every day.

"They have their status, they have power, they have money. It's quite easy for them to pay for another woman," said Ronnachai Kongsakol, psychiatry professor at Ramathibodi hospital in Bangkok.

His research on extramarital affairs by officials suggests that opportunity, intimacy and sympathy are the main motives for men to seek mistresses.

But it's not just Thai men who are tempted to stray.

Amnuaiporn estimates that three out of 10 calls are now from suspicious husbands.

Panaa had been living with her partner for seven years when she found out he was secretly seeing another woman.

She tracked down the suspected mistress and confronted her, only to be faced with a surprising revelation.

Her rival produced a marriage certificate that proved she was actually married to Panaa's partner -- meaning Panaa was the mistress.

"I was shocked as I never thought that I would be the mistress. I never had any idea. I thought I was morally superior but it turned out I wasn't at all," said Panaa, whose asked that her real name be withheld.

While she did not need a detective to reveal the scandal, many people do seek help to find the truth.

"If there was no one like me, these people would have to suffer for a long time. Me, my job, helps people to open their eyes. I let them see the truth," said Amnuaiporn.

Her job has got her noticed in Thailand where her good looks, chatty demeanor and anecdotes of sordid transgressions have been lapped up on television and in print.

She has even produced her own book -- "The Private Eye: They ask me to investigate adultery" -- which is billed as the first in-depth account of the work of a female private detective.

Featuring images of her in various disguises she uses for work -- including a native American Indian outfit complete with feathered headdress -- the book includes true stories from her years tracking the unfaithful.

In one instance she was hired by a wealthy man who suspected his wife was straying.

When he pretended to go on a business trip, his wife lost no time in meeting a man and going with him to a "short stay hotel", with Amnuaiporn and the husband in hot pursuit.

He banged on the door of the illicit couple's room and confronted the wife's lover, who claimed to be alone.

After a search of several nearby rooms, Amnuaiporn and the husband found the wife stuck to the wall of an adjoining balcony "like a gecko".

The book also reveals basic tips on how to tell whether your partner is about to stray, such as a sudden upturn in their grooming and unexpected business trips to other parts of the country.

While Amnuaiporn's career has brought her renown and excitement, her constant exposure to infidelity has given her little desire to settle down.

"I am afraid that I will face the same problems I've seen. I think it's good to stay single," she said.

Spouse's Unemployment-related Stress Can Affect You Too

The stress of an unemployed spouse can affect the productivity and home life of the employed partner, according to a new study.
Advertisement
<< Increased Risk of Stress Facture Among Adolescent Girls Doi...
Japan's Young Hopes Shattered >>