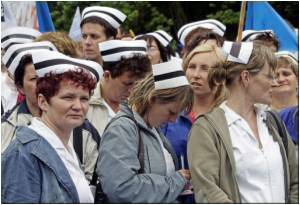 The New South Wales nurses suspended their stir Thursday and re-opened more than 570 hospital beds they had shut down in the last eight days.

The NSW Nurses' Association is seeking a ratio of one nurse to every four patients - the current standard in Victoria.

Overworked and exhausted nurses in the state of Queensland in Australia are turning to prostitution as a better option.
Advertisement

As bed closures stretched to include 67 facilities in the state, the government made an offer to the agitating nurses, but details are not known. The health department will only say that the terms cover both staffing and pay issues. nurses.

"The association and the department will work together now to refine the details of that proposal with a view to resolving the matter,"she said.
Advertisement
Acting General Secretary of the New South Wales Nurses Association Judith Kiejda says the industrial action has forced the government to act.

"The unprecedented action that our members have taken in the last 10 days has obviously put enough pressure on the Government to understand that there is an issue out there," she said.

She also noted the beds would reopen but they would take a couple of days to consider the government's proposals.

"We were notified in the commission (on Wednesday) that there is an offer ready to be put but we had to lift our action before that occurred," Ms Kiejda said.

"Council met last night and decided that would happen."

"We will spend the next few days sorting out the detail - obviously the devil is in the detail - and making sure it meets the deal-breaker situation," Ms Kiejda said.

"We will seek to improve it if we feel it needs improvement."

The one nurse to four patients ratio is based on research and patient safety and cannot be negotiated, she added.

"It will be expensive but what price is the state's health system?"

She says a fair offer has been made.

"The NSW government has finally dropped its obstinate refusal to make an offer," he said in a statement on Thursday.

"The union based its claim on evidence that ward staffing that allows for appropriate attention to each individual patient improves recovery times and reduces the number of hospital deaths ...

"The Greens urge the government to negotiate in good faith with the nurses."