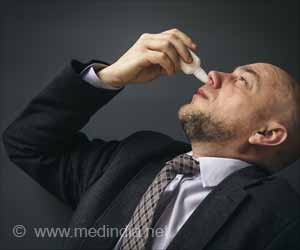 Esketamine nasal spray is found to be safe and effective in treating depression in treatment-resistant patients, according to a new study which will be published online in the American Journal of Psychiatry.

This is one of the critical studies that led to the Food and Drug Administration (FDA) approval of esketamine nasal spray recently in conjunction with an oral antidepressant, for patients depression who are resistant to therapy.

Advertisement
‘Patients with resistant depression could benefit from the usage of esketamine nasal spray, although, caution is necessary for its application in clinical practice.’
Read More..

Depression is common, and as many as one-third of people with depression are considered treatment resistant--not finding relief from symptoms even after trying several antidepressants. Esketamine offers a new fast-acting treatment for people that have not responded to other depression treatments.


Michael Thase, M.D., one of the study authors, described the study during a briefing held during the Annual Meeting of the American Psychiatric Association. The phase 3, double-blind, active-controlled study was conducted at 39 outpatient centers from August 2015 to June 2017 and involved nearly 200 adults with moderate to severe depression and a history of not responding to at least two antidepressants. Participants were randomly assigned to one of two groups.
Advertisement
One group was switched from their current treatment to esketamine nasal spray (56 or 84 mg twice weekly) plus a newly initiated antidepressant (duloxetine, escitalopram, sertraline, or extended-release venlafaxine). The other group was switched from their current treatment to a placebo nasal spray in combination with a new antidepressant.

The improvement in depression among those in the esketamine group was significantly greater than the placebo group at day 28. Similar improvements were seen at earlier points in time.

Adverse events in the esketamine group generally appeared shortly after taking the medication and resolved by 1.5 hours later while patients were in the clinic. The most common side effects included dissociation, nausea, vertigo, dysgeusia (distortion of the sense of taste) and dizziness. Seven percent of patients in the esketamine group discontinued the study due to side effects.

"This trial of esketamine was one of the pivotal trials in the FDA's review of this treatment for patients with treatment resistant depression. Not only was adjunctive esketamine therapy effective, the improvement was evident within the first 24 hours," Thase said. "The novel mechanism of action of esketamine, coupled with the rapidity of benefit, underpin just how important this development is for patients with difficult to treat depression."

In an accompanying commentary in the American Journal of Psychiatry, Alan Schatzberg, M.D., at Stanford University School of Medicine, highlights several areas where information about the best use of esketamine is lacking, such as how long and how often to prescribe it, and raises concerns about the potential for abuse. While he notes that esketamine could be useful for many patients with depression, he cautions that "there are more questions than answers with intranasal esketamine, and care should be exercised in its application in clinical practice."

The commentary describes esketamine's relationship to ketamine, an anesthetic in use for decades that has also been used recreationally as a party drug. While ketamine administered intravenously at sub-anesthetic doses is an effective treatment being used for refractory depression, at present, intravenous ketamine for the treatment of depression has not been approved by the FDA, although it can be prescribed off-label.

Ketamine is composed of molecules that are mirror images of each other (S-ketamine and R-ketamine). It is the intranasal formulation of the S-ketamine molecule (i.e., esketamine) that received FDA approval.