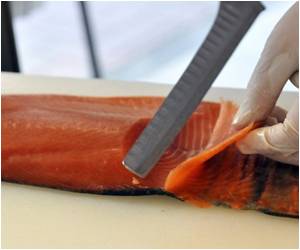 Salmonella's weapon is a tiny nanoscale syringe. Using this, the pathogen injects its molecular agents into the host cells and manipulates them to its own advantage. A team of scientists at the Biozentrum of the University of Basel demonstrate in their current publication in Cell Reports that a much investigated protein, which plays a role in Salmonella metabolism, is required to activate these needles and makes the replication and spread of Salmonella throughout the whole body possible.

The summer months are the prime time for Salmonella infections. Such an infection is caused by the ingestion of contaminated food, for instance ice cream or raw eggs, and can cause severe diarrhea. Salmonella can even cause life-threatening illnesses such as typhoid fever.

For several years, Prof. Dirk Bumann, from the Biozentrum of the University of Basel, has been studying the infection mechanisms of Salmonella. Together with his team, he has discovered that the bacterial protein EIIAGlc is not only responsible for the uptake of nutrients, which was previously known, but also plays a central role in Salmonella colonizing the host organism.

Salmonella possesses a sophisticated injection apparatus, the type III secretion system. With this molecular syringe, it injects toxins directly into the host cells. These toxins manipulate host cell processes to create optimal growth conditions for the bacteria in hiding. Unforeseen, Bumann and his team uncovered an important teammate in the infection process, the protein EIIAGlc. The protein was already known for its many functions in bacterial metabolism, such as in the uptake of sugars molecules.
Advertisement
The researchers' attention was attracted by the fact that when EIIAGlc is defective Salmonella completely loses its capacity for intracellular replication and to spread throughout the organism. Further investigations finally brought the scientists from Basel onto the right track. The protein EIIAGlc docks onto the injection apparatus in the bacterium, stabilizes it and finally activates the release of the toxins. "We can clearly demonstrate that the activation of the secretion system is the main function of the protein EIIAGlc, while the many other described metabolic functions play a minor role in the occurrence of illness", says Bumann bringing his findings to the point.

It is estimated that each year about 16 million people worldwide contract a life-threatening Salmonella infection that affects the whole organism. The spread of the bacteria in the host is highly dependent on the functional capacity of the injection system. "In EIIAGlc, we have found a new potential therapeutic target", says Bumann. By inhibiting the protein, one could strategically put the infection apparatus out of action. As this injection needle is primarily found in pathogens, infections could be effectively and specifically fought without harming the natural intestinal microflora.

More News on:
Magical Millets for Your Health Diet and Nutrition Tips for Athletes Nutrition IQ Diet during Typhoid

Salmonella's Invasion Strategy Decoded
The most common causes of food-borne gastroenteritis include strains of Salmonella bacteria....

Immune System can Backfire and Allow Growth of Bacteria Like Salmonella
Immune system protects us against a broad range of infections, but can sometimes backfire and make ....

Allowing Salmonella Bacteria to Form Biofilms may Make It Extraordinarily Difficult to Kill It in a Food Processing Facility
A new study reveals that ability to cleanse out Salmonella bacteria contamination in a food ......