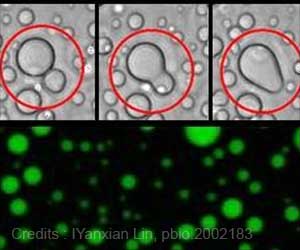 A novel property of tau has been identified, which is the aggregation-prone protein that is associated with Alzheimer's disease. This new step may help in revealing the formation of pathological tau aggregates, reveals a new study.

The study was published in the open access Journal PLOS Biology by the laboratories of Songi Han and Kenneth S. Kosik at the University of California Santa Barbara.

The authors show that tau protein can condense into a highly compact "droplet" known as a complex coacervates in a complex with RNA while retaining its liquid properties.


‘Tau proteins modulate the stability of axonal microtubules and are found abundantly in neurons of the central nervous system.’


Tau and RNA are held together in phase separation from the surrounding environment, and despite the high concentration, the tau protein initially avoids assembling into fibers. However, this novel state creates a set of conditions in which tau becomes vulnerable to aggregation.

Depending on the length and shape of the RNA, increasing numbers of tau molecules can loosely associate with the complex. These properties have been observed with several other neurodegenerative disease-related proteins, such as those that cause amyotrophic lateral sclerosis.

The findings provide a biophysical clue on the path to understanding tau pathology. Critical steps along this path include the intrinsic ability of tau to fold into a myriad of shapes, its ability to bind to RNA, and its ability to form compact reversible structures under physiologic conditions.

Future research is required to identify the counterpart of tau droplets in living cells, and to determine how and why a cell regulates the formation and dissolution of these droplets, insights that could lead to potential therapies.

How the Protein Tau Transitions from a Soluble Liquid State to Solid Fibrous Tangles
Scientists do know that part of the disease's progression involves a normal protein called tau, aggregating to form ropelike inclusions within brain cells that eventually strangle the neurons
READ MORE

Tau Protein May Be The Leading Culprit in Alzheimer's Disease
New molecular imaging research is revealing how tau, rather than amyloid-deposition, may be more directly instigating neuronal dysfunction of Alzheimer's disease.
READ MORE