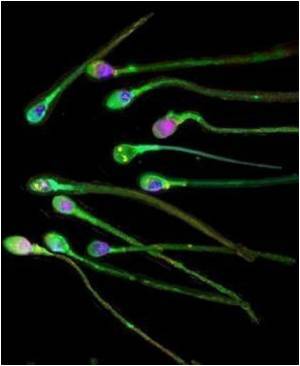 Checking the distance between a man's scrotum and anus might predict his ability to reproduce, suggests a new study.

"We have observed in animal studies that anogenital distance (the distance between the scrotum and anus) is an important measure for genital development and may be shorter in males with abnormal testicular development and function," said lead author Michael Eisenberg, a male reproductive medicine and surgery fellow in the Scott Department of Urology at Baylor College of Medicine.

"We initiated a clinical study to determine if the distance varied between infertile men and fertile adult men. If so, this could help us develop a novel method to evaluate patients with impaired reproductive potential," he said.


Eisenberg and his research team measured the anogenital distance and penile length of 117 infertile men and 56 fertile men from an andrology clinic.

Encyclopedia section of medindia gives a brief introduction to infertility and reproduction
Advertisement
They found that the infertile men possessed a significantly shorter anogenital distance and penile length when compared with the fertile men.

"There are two main implications of this study - first, this could represent a non-invasive way to test testicular function and reproductive potential in adult men and second, it suggests that gestational exposures and development may impact adult testicular function," Eisenberg concluded.

The finding was published in the journal PLoS ONE.

The current trend among the working-class people is to postpone the starting of a family. This will lead to dramatic rise in the incidence of infertility.
Advertisement
Advertisement