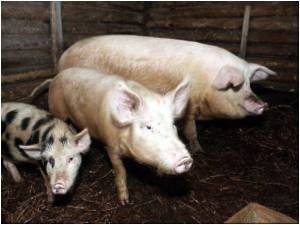 A newly developed genetically modified pig holds the key to the development of new treatments for retinitis pigmentosa (RP) - a most common form of retinal disease, say researchers. The pig model was developed by researchers in the University of Louisville Department of Ophthalmology & Visual Sciences and at the National Swine Resource and Research Center at the University of Missouri.

"We have previously relied mostly on rodent models to study the development and progression of this disease, and although very important insights have been obtained, rodent eyes are much smaller than human eyes and they lack some important retinal structures, so the development of a large animal model of RP is an important step forward in the research of this blinding disease," said Henry J. Kaplan, MD, Evans Professor and chair of the Department of Ophthalmology & Visual Sciences at the University of Louisville, and senior investigator on this study. "This new tool, developed in the miniature swine, should allow important progress in the development of novel treatments for this disease."

Retinal detachment needs to be treated as soon as possible for good visual recovery. Its surgery involves sealing of the hole or tear responsible for the detachment.
Advertisement

The researchers used miniature pigs, which weigh about 150 pounds at maturity, because they are much more manageable than the larger, domestic pig.The results of the study were published in the January 2012 issue of the journal Investigative Ophthalmology & Visual Science. The research was funded by The National Institutes of Health and the National Eye Institute, Research to Prevent Blindness, Discovery Eye Foundation, the National Institute of Food and Agriculture, the Edward N. and Della L. Thorne Memorial Foundation, the Kentucky Research Challenge Trust Fund, the Kentucky Science and Engineering Foundation, the Moran Eye Center Tiger Team Translational Medicine Award and the University of Louisville Clinical and Translational Science Grant Program.


"Pigs have become an important tool in helping researchers understand many human diseases," said Randall S. Prather, PhD, distinguished professor of reproductive biotechnology in the University of Missouri College of Agriculture, Food and Natural Resources, and investigator on the study. "Additionally, the miniature swine are much easier to handle than their larger kin and don't present researchers with as many challenges. It's important that we look for these new avenues for research as we continue our search for cures to some of the world's most prevalent diseases."

Multiple choice questions related to eye structure and common eye diseases
Advertisement
Researchers used an abnormal gene, RHO P23H, the most common cause of autosomal dominant RP, in which affected individuals have a 50/50 chance of passing the disease on to their children. They inserted the mutant gene into the nucleus of miniature pig embryos, which were then transferred into surrogate mothers for gestation. The offspring expressed the mutant gene that causes RP and their eyes showed classic features of the eye disease. This animal model will now be used to screen the efficacy of various novel therapies for this disease, including stem cell transplantation, drug therapy, gene therapy and the retinal prosthesis.

"We now have a model of RP that mimics human disease in a large animal," Kaplan said. "These pigs will be on the front line of the development of new therapies for this devastating disease."

Retinitis pigmentosa affects about 1 in 4000 Americans and can cause retinal degeneration, which leads to night blindness, loss of peripheral vision, and ultimately total vision loss.