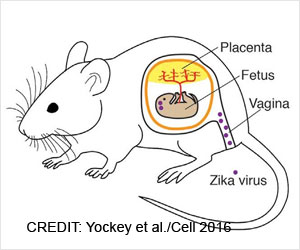 Mosquito-borne Zika virus can also be transmitted from person to person through sexual contact. But, the mechanism used by the virus to invade the body from the genitals is unclear. A group of researchers has developed the first mouse model of a vaginal Zika infection to understand the mechanism.

"The Zika virus appears to have a niche within the vagina," says senior author Akiko Iwasaki, an immunobiologist at Yale University. "We see from our model that it's a place where the virus can replicate for an extended period, and in pregnant mice, the vaginal infection can lead to brain infection of the fetus and growth restriction."

Local Spread of Zika in Florida may Have Reached Gulf Coast

Four more new non-travel related cases of Zika have been identified in the Wynwood neighborhood of Miami, which was the first area to report local transmission.
‘In a mouse model, Zika virus survived and replicated for several days in the vaginal mucosa and slowed the brain development in fetuses.’

The researcher has been studying viral infections of the genital mucosa for years using herpes simplex virus. When reports began to surface of the Zika virus being sexually transmitted, Iwasaki's interest was piqued.


"Using our expertise in genital herpes, we want to understand how the Zika virus behaves when it's transmitted vaginally," said Iwasaki. "The vaginal mucosa was predicted to be a site for virus replication, but there was no hard evidence, so we wanted to create a mouse model."

The main hospital in Guatemala's capital confirmed the country's first case of a Zika-linked birth defect in a newborn and two cases of a related nerve disorder.

Mice are not susceptible to Zika virus, but, when it came to a vaginal infection, Iwasaki's team discovered that the virus could survive and replicate for several days in the mucosa even in normal mice. "That's the most surprising finding of this study," Iwasaki says.

When the researchers vaginally infected normal, pregnant mice with the Zika virus, they observed slowed development and brain infection in the fetuses. In the mice genetically engineered to be vulnerable, the virus replicated uncontrollably in the fetus and caused spontaneous abortions. Iwasaki and her colleagues plan to continue researching vaginal infection with the Zika virus in both types of animals. "Studying these things in parallel allows us to see the spectrum of disease," she explains.

The research team is working on a number of critical questions with the new model, including what route the virus takes from the vaginal mucosa to infect the fetus. "The fact that a sexually transmitted virus can end up in the brain of the fetus is worrisome," says Iwasaki. "We're investigating this rigorously." The researchers are also examining new ways of blocking Zika virus entry through the vaginal tract. The study gives clues for blocking the virus within the genitals through the interferon pathway.

"We're cautious about any conclusions regarding human transmission at this point, but the vagina may be a place, in addition to the testes, where the Zika virus can replicate for an extended period of time," says Iwasaki. "We need to be careful about advising the public about sexual exposure with infected women. This study adds a piece to the puzzle in terms of the vagina as a site for virus replication--vaginal secretions may be a reservoir for the Zika virus in humans, but this requires more investigation."

Brazil Had Just Notched Up a Tiny Victory Against Zika

The identified antibodies can neutralize African, Asian and American strains of Zika virus to about the same degree. The antibodies can also be used in diagnostic tests.